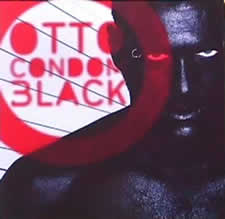 Condom Black is the follow-up to the 'Samba Pra Burro' CD Otto put out in 1998.

Otto is a Brazilian artist with a really cool sound. He honors the samba history of Brazil while using the electronic sounds available today in a live band complete with guitar, bass, drum, brass, and tons of percussion.

His vocals are in Portuguese except for a couple of songs. The first song 'Dilata' is one of my favorites. It sounds like it could have come from the new (much loved) De Phazz CD. The production is top notch, the sound style is smooth and sublime.

The second song 'Anjos do Asfalto' pits lots of percussion against a dual guitar/bass riff, with the whole thing held together by Otto's tuneful voice. I like this song a lot too.

'Armadura' makes it three in a row - This song has the samba feel that J-pop artist Mansfield used to make your hips shake on his song 'Atelier'. Only difference is that Otto is a Brazilian living in Brazil - he has the real sound and plays it perfectly live with a band. Back to the Otto track 'Armadura': it has everything a good song should have. A great track.

The fourth song, 'Cuba' reminds me of 'Bob', one of the standout tracks from the first CD. Both songs have a fluid vocal that dances over the music.

Next we'll move to the eighth track, 'Por Que'. It is a dreamy cut that allows the band to breathe, particularly at the end (my favorite part of the song).

'Street Cannabis Street' was initially my favorite cut, but through repeated listening has sunk to being the cut I least want to hear. What initially attracted me to it was the ramshackle (yet dead on) beat, the duet with the accented girl, and the Steve Miller sample. What has made me avoid the now song is the chorus of 'save the children now'. It just sounds too corny after a few listenings.

The title track 'Condom Black' has the same type of super-percussion that the second cut 'Anjos do Asfalto' had. 'Condom Black' has odd music in it and an electronic sound like speakers ripping. It is one of the best cuts on the disc.

The last of my favorites is 'Retratista'. It is a quiet cut that uses the samba beat arrestingly well. Check out either of the Otto CDs if you can find them. Very good disc!