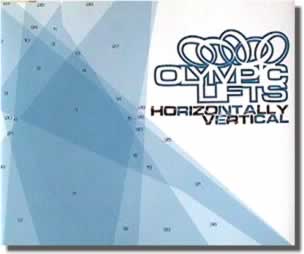 Olympic Lifts is made up of five musicians from Belfast, Ireland. It's the latest group to sign to the Berlin-based label Bungalow, which has also put out records by Yoshinori Sunahara, Le Hammond Inferno, and Stereo Total.

Olympic Lift's music fuses pop, samples, breaks, and the vocals of two male M.C.s. 'Horizontally Vertical' is the current single to come out of their full-length album, 'Do One.'

This CD features the original version of the song plus two remixes. The one you'll find on the album has catchy guitar riffs, dj scratching, and chanting in the background. The main vocalist's singing style reminds me of Tim Burgess during the latter part of the Charlatan's career, when his obsession with American hip hop grew to be more influential on the group's music.

The first remix on this disc is by Young Einstein. He emphasized on the main vocals, added more horn sounds, and changed some of the samples.

My favorite remix, which is done by the Irish project Jupiter Ace, closes the three-track EP. It mixes 1980's early computer game sounds with a cheesy italio disco piano arrangement. It's definitely the most danceable version of 'Horizontally Yours.'