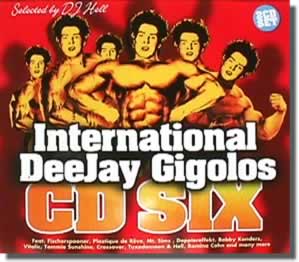 Kings of the dirty electronic sound, whether it be on the electro end or the industrial rock end, International Deejay Gigolos serve up another 2 CD set on Volume 6 of their series of compilations put together by DJ Hell.

What's great about these Gigolo compilations is their impeccable ability to combine the electronic side of things with the punk rock side of things, which means there's never a dull moment.

Another thing I like about these compilations is that is usually quite apparent to you when you like or dislike a song and when you don't like something you can move onto the next track easily enough. My favorites ended being mostly on Disc One.

Disc Two seemed to go more towards the cheesey end of the spectrum, (tracks sounding like Orchestral Manoeuvres in the Dark or Tangerine Dream for instance) but there still were quite a few tracks on cd two I liked too.

Here's a rundown of my favorite tracks on each disc.

4. Scott Ferguson 'Rational Behavior' - A laid back rap-styled track with a slapping rhythm and sighing buildups.

10. Valium 'The Sadness of Robot and Human' - repetitive beats, electronic bleeps fashioned out of the night and a robotic sound which has an epic approach to it. 11. Crossover 'Extensive Care' - a Chicks on Speed sound-a-like who do get it oh so right.

13. Mick Wills 'KIL! KIL!' - Raunchy beats with a Shitkatapult sound, but with a really nice high pitched melody building up

1. Fat Truckers 'Super Bike' - Starts out disc two with raunchy beats and cool vocals about motor bikes. This track sounds like an electronic Loop (the band) or something inspired by the Cramps.

2. Atomizer ' Hooked on Radiation' - Soulful hard hitter will get the floor raving with this track.

8. Chris Korda 'When it Rains' - Not the best song from Chris Korda's single but still a good one. He's come miles from his mid-90s work - thank god.