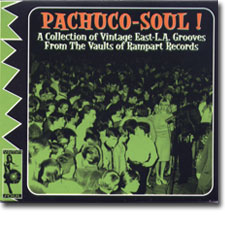 The East L.A. scene from the 1960s of Mexican-American bands is a vastly under-rated scene that is best remembered for hits like The Premiers' Farmer John and Cannibal & the Headhunters' Land of a Thousand Dances.

Back in 1999 Varese Sarabande did a fine though somewhat confusing job documenting the scene with its four volume series The West Coast East Side Sound. That series was so jumpy genre-wise that it often meant owners of that compilation series had to dig and cherry pick their favorites.

This time around, the Spanish label Vampi Soul has given it a shot covering the same Eddie Davis produced material on a one disc compilation called Pachuco Soul: A Collection Of Vintage East LA Grooves From The Vaults Of Rampart Records. Eddie Davis owned a number of labels including the Faro, Linda, Rampart, Valhalla, Prospect, Boomerang, and Gordo labels, but Pachuco Soul hones in on Rampart Records, and Vampi Soul does a much better job than Varese with a less schizophrenic compilation, though it still covers a lot of ground from the early days of garage rock soul, to the later period latin soul-rock fusion and disco.

Even though key tracks are missing like The Premiers' Farmer John or The Village Callers' Hector or their version of Evil Ways, there's plenty of good stuff to make up for it. For those who already own the The West Coast East Side Sound, there's not much new here, but instead it's all about the sequencing, which makes for a much easier listen where you don't need to hunt around for your favorites.

You just can't go wrong with most of what is found here, including tracks like

There's also an un-edited version of Cannibal & the Headhunters' Land of a Thousand Dances which extends that classic track. Instead of The Village Callers' Evil Ways or Hector, we get their sublime take on Joao Donato's The Frog.

The Atlantics' Home On The Range and Beaver Shot include a very young Barry White and Larry Tamblyn from the Standells. Also, Larry Tamblyn produced the East Side Kids' Listen To The Wise Man. The East Side Kids were a favorite of sorts in the Sunset Strip scene in LA which at one time or another featured Jimmy Greenspoon (later of Three Dog Night) and Craig Nuttycombe (later of Lambert & Nuttycombe) who recorded a bunch of singles and an lp on Uni called The Tiger and the Lamb in 1967.

Rampart Records songwriter Chick Carlton has a number of songs featured here including the Sunday Funnies' Whatcha Gonna Do (When The Dance Is Over) (Chick also wrote A Pindaric Ode for the Sunday Funnies - a track not included here), Thee Enchantments' I'm In Love With Your Daughter, and Sarah James & The Soul Babies' Takin' Care Of Business, all of which have a killer soul garage sound to them. Chick Carlton also wrote Devil in Disguise, Gonna Do, and Strange World for Cannibal & the Headhunters, tracks that aren't featured here but can be found on Vampisoul's Cannibal & the Headhunters collection.

The Majestics' (I Love Her So Much) It Hurts Me probably has both Chick Carlton and Barry White on it and is the best and most unique track here since it also features the Ralph Ventura Mariachi band which adds tremendously to the musical arrangement.

One G Plus 3's Poquito Soul is an early boogaloo favorite from 1969, while the Eastside Connection's You're So Right for Me was a disco hit in the late 70s, showing just how far this compilation goes in documenting the Eddie Davis productions for Rampart Records. This compilation is so chock full at 79 and a half minutes, you just can't go wrong.