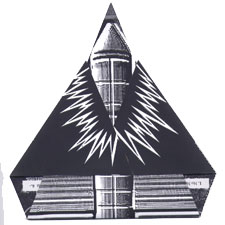 Tenth To The Moon is an industrial / electronic band from Atlanta consisting of Mitch Foy (drummer extraordinaire of Pineal Ventana) and Doug Hughes (drummer of King-Kill/33°).

Mitch and Doug have played together before in King-Kill/33°, where Mitch was the vocalist.

As Tenth to the Moon is composed of two musicians who have played as drummers, all of the music is percussive and hard hitting. The two frequently use other musicians on live shows and recordings, including Eric Young of Brain Box and Skip Engelbrecht of United States.

Showing a love for such bands as Magma and Can, Tenth To The Moon play hard, with a lot of electronics and an industrial edge, particulary on the effect-laden vocals.

Even though the CD is called Live, the last two tracks are studio tracks. The rest of the disc was recorded at the Atlanta club Lenny's on June 11, 2005.

The CD opens with a Dark Day cover called No Nothing Never, from the 1980 LP Exterminating Angel. Robin Crutchfield was the keyboard player in Arto Lindsay's NYC no-wave band DNA, which formed in 1978 and also included Ikue Mori on drums. He left the band after 9 months to go solo as Robin Crutchfield's Dark Day, putting out 2 classic LPs (Exterminating Angel in 1980 and Window in 1982).

The sleeve for the CD is an 8inch x 7.5inch rocket that folds out to additional artwork

Pineal Ventana in the gullbuy: