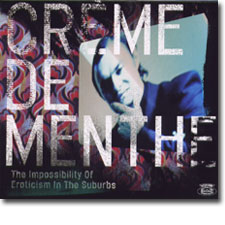 Creme de Menthe is Matthew Aldworth from the UK, and he is helped on his Disko B disc The Impossibility Of Eroticism In The Suburbs by Mysterymen .

Creme de Menthe originally released the Plastique EP on OSCARR (Optimo Singles Club And Related Recordings - which also released Tomorrow's Clowns by Uter which was distributed by Tiger Sushi back in 2001 from which Plastique, We Are Living In The Night, Hot, and Destroy The Human Race are taken from for this cd.

This same EP was later reissued by Disko B in 2002. Plastique also appeared on the first Electric Pop compilation and City Rockers Present Futurism 2.

So there's been a long wait for a full length Creme de Menthe cd but it's finally here - and it lives up to what came before. The Impossibility Of Eroticism In The Suburbs is filled with that Creme de Menthe sound which includes slinky Gary Numan-esque synths, dirty electronic techno rhythms, robotic lead vocals (often with added female vocals - in this case a guest appearance from Bree McMasters, who is an actual professional "phone-sexette" from LA) and songs about sadomasochism (SadomasochistUs), destroying the human race (Destroy The Human Race), living in the night (We're Living In The Night), and cracking the burning whip (Crack The Burning Whip).

There isn't anything too deep about Creme de Menthe, and his sound doesn't always work (mostly when the synths seem a little lazy and don't create the much needed tension this type of music requires to succeed), but for the most part anyone looking for a more sadistic take on the Giorgio Moroder styled synths, Kraftwerk robo-disco, and EBM will be pleased with this Disko B release.

My favorite tracks include Do You Want My Love?, which features phonesex worker Bree Mcmasters on guest vocals. The Gary Numanesque synths meet the pulsing rhythm perfectly as a bed for Matthew Aldworth and Bree Mcmasters' vocals (Bree's vocals have a Chicks on Speed feel to them). There's the added bonus of the robotic voices which join the foray. Do You Want My Love? tells a story too, which is fun.

With We're Living In The Night, Matthew Aldworth completely digitises his vocals and the building synths and sense of foreboding works wonders. It sounds like the song starts with these lyrics too: "Eating all my flesh, there's nothing I can do, soon I will forget, the person that I knew."

Crack The Burning Whip has one of the best rhythms on the album, while the synth lines remind me of the PWOG side project Exquisite Corpse.

Plastique is where the Creme de Menthe sound all started and it definitely stands up to the test of time as being one of the best cuts on the album with its The Hacker meets Dopplereffekt type of sound. I bet Matthew Aldworth wishes he could've worked with Miss Kittin.

Vernichtet die Menschheit is a German-language bonus track version of Destroy The Human Race which makes this song sound way more evil so it's a nice bonus.