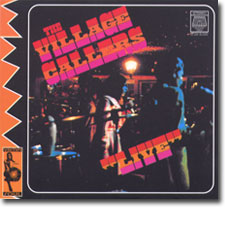 The Village Callers Live album is a superfine live document recorded at a popular Eastside LA night club called the Plush Bunny circa 1968, from an obscure latin influenced band that was a favorite on the Eastside L.A. scene in the late 1960s. Vampi Soul treats this live platter with respect, by including the entire album plus two non-lp bonus tracks that bookend the live album. The cd goes beyond mere document, and is one of the best and most fun live 60s albums I've heard in awhile.

Joe Espinoza (bass) and Ernie Hernandez (guitar) were the brains behind The Village Callers and they were joined by Angie Bell on lead vocals. Together The Village Callers combine to create a rocking hybrid on this live album of original material (Hector parts one and two, and I'm Leaving) and covers of Gladys Knight & the Pips' I Heard It Through The Grapevine, I Don't Need No Doctor (a cover of the Ray Charles b-side of Please Say You're Fooling from 1966), When You're Gone (a minor Brenda & the Tabulations hit in 1968 popular on the LA East Side), Wilson Pickett's Ninety Nine And A Half, Laura Nyro's Stoned Soul Picnic, Bo Gentry's Mississippi Delta, Joao Donato's The Frog, and an Aretha Franklin medley.

The Village Callers have an incendiary live sound and it's a no brainer why their record label wanted to record them in a live setting. They varied there sound between male and female vocals on each song and could do them equally as well. The music is a storming live sound, and all this means there's no bum cuts here at all.

For those of us who first heard the Village Callers on the sporadic but enticing West Coast East Side Sound compilation series (on Varese Vintage) which featured "Hits By East Los Angeles Most Popular Groups" (most known for Land Of 1000 Dances by Cannibal And The Headhunters), Hector is a recognizable and fun tune. It's a Stax/Volt styled instrumental with a funky backbeat and a playful live vibe, that has the group intoning "Hector!" every so often (Hector was the group's manager). And we are treated to two versions of Hector for an added bonus.

The other bonus track called I'm Leaving is the last track on the disc, which was the b-side to the group's single Hector. It's a more mellow self-penned tune written by Village Callers' guitarist Ernie Hernandez with dual male/female vocals.

The Village Callers in the gullbuy: