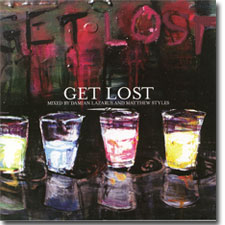 Crosstown Rebels is the label run by Damian Lazarus, the guy who ran the Electroclash-era label City Rockers. On that label he released 12inch singles and compilations that had electronic artists writing in a rock (verse/chorus/verse) format. The biggest success on City Rockers was FC Kahuna.

4 years later we find Damian Lazarus having released several minimal techno compilations, of which Get Lost is the latest. On the disc he splits credits with Crosston Rebels label manager Matthew Styles. who runs the weekly Dig Your Own Rave night at the London club The Tea Room. Matthew also released the See You @ the Party mix CD on the Music For Freaks label in January 2005.

Reviews mention how warm the sounds on Get Lost are, but I don't really hear that. What I hear is a fairly generic mix that would be fine as background music while working on your computer, but is not that compelling when listened to as the featured attraction.

Repeat Repeat's Carpark is one of my faves on disc1. It is an instrumental with a bouncing electonic percussive sound that makes the track playful and gives it momentum.

Ost & Kjex's How Not To Be A Biscuit is another favorite from CD1.

Of the two CDs, I I like CD2 better. It is unmixed and has a few good songs on it.

Joy, by Four Tet, is a brief instrumental that is interesting.

John Tejada is someone I've never listened to. I always figured his to be a mainstream techno DJ, but his Paranoia is one of the best tracks on disc 2. It has simple disco-derived electonic drums and acid synth behind a women spouting couplets over the music.

Mint Condition by Modeler has an ascending syth riff with a sound like a slide whistle. It continues the Acid House feel of the tracks just before it, but is the most interesting due to the dub feel and the lack of treated vocals.

Duoteque's track Lola is pretty fine too, though you can't play it on the air because the f word shows up four times in Andrea Ferlin's sweet & sexy vocals.

This CD is nothing too great or distinctive. I wouldn't recommend buying it unless you disagree with things I've said in this review, or it has a song you already know and want.

Damian Lazarus in the gullbuy: