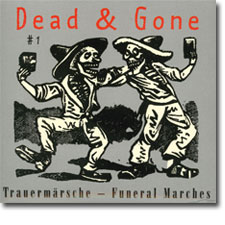 Not many compilations have covered "death songs", even though there have always been songs of death since the beginning of man. We all eventually die, and yet death is often overlooked until its that time. The German label Trikont and UK label Ace have both released compilations of death songs and each label has a different take on this theme, taking a different approach to the "death song". Both labels have made an art form of the compilation cd, and each of these cds is artfully done.

Trikont has been releasing astoundingly originally compilations with a seeming freedom other labels can't enjoy. Compilations including Creative Outlaws: US Underground 1962 - 1970, Queer Noises 1961 - 1978: From the Closet to the Charts , and their Flashbacks series all show just how deep Trikont can go with a compilation, where other labels just don't go. The Dead & Gone: Songs of Death (#1 and #2) are just such compilations.

Dead & Gone #1 is subtitled Trauermärsche - Funeral Marches, so its focus is on the heartfelt beauty of the various funeral marches from around the world, something no other compilation has ever delved into. 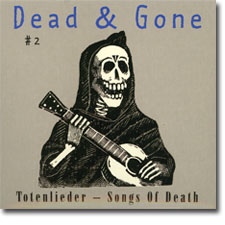 This compilation veers from the dirges of Leichenzug's Mit Blaskapelle with its church bells ringing in the background, to the Mexican Banda De Tontontepec's stately Tres Marias and to the wildly rhythmic drumming of the Village Drummers of Ghana and Begräbniskapelle Aus Saigon.

Interestingly, songs by Albert Ayler, Robert Wyatt, and Tom Waits are interspersed with numerous brass bands (the Tuxedo Brass Band, the Olympia Brass Band, the Eureka Brass Band with George Lewis & His Ragtime Jazz Band and the Treme Brass Band). Trikont sequences all of these tracks together perfectly into a seamless compilation.

Dead & Gone #2 is subtitled Totenlieder - Songs of Death, so it focuses more on this form of death songs. It's a much more accessible compilation than the funeral marches because it features more pop songs

These pop songs all have an arch gothic overtone to them.

Interspersed amongst these pop songs of death, are more traditional fare like Lydia Mendoza's La Bada Negra, Edith Und Karl Dworak's Dtellt's Meine Ross in Stall, and Jasper Smith's Died for Love. The gothic overtones of the more pop oriented material works well with the more traditional tunage, and Trikont again sequences all of these tracks together so that it's like you are listening to a soundtrack to a Coen Brothers or Luchino Visconti film. 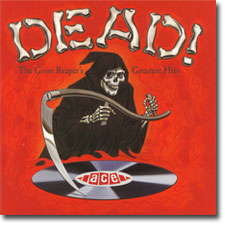 Ace takes a different avenue when dealing with songs of death. Instead, they take a close look at the "death disc" which was a 1950s and 60s pop music phenomenon. Best remembered songs in the genre were The Shangri-Las' Leader of the Pack and Ray Peterson's Tell Laura I Love Her (only the second is included here, with the lesser known but still wonderful Give Us Your Blessings by The Shangri-Las in place of Leader of the Pack).

Another girl group classic in the Shangri-Las style is found here in the The Goodees' Condition Red, a tune released on the Stax Records subsidiary Hip in 1968. These sweet sounding girls aren't always so sweet when singing about their dead boyfriends.

A novelty girl group record by the Martin Sisters, written by Joe Simmons, called Mother Mother (I Feel Sick) has that Shangri-Las style but doesn't work quite as well as Condition Red, but is still an interesting listen.

There's plenty of golden oldie odes to dead girlfriends in tunes like Last Kiss by J. Frank Wilson & The Cavaliers (a Wayne Cochran tune), I Want My Baby Back by Jimmy Cross, and Ebony Eyes by The Everly Brothers (a John D. Loudermilk tune).

Some classic early rock-n-roll death tunes can be found in the death grind blues of Donald Woods & The Vel-Aires' Death of an Angel and the Elvis inspired dirge of Jody Reynolds' Endless Sleep.

The dragsters and surfers weren't safe either, when Jan & Dean sing Dead Man's Curve (Jan & Dean can also be heard singing the lesser known A Beginning From An End) and The Riviares play The Death Of A Surfer (an instrumental tune, mainly, actuall,y and for that reason serves as filler).

Carolyn Sullivan's soulful ode to suicide, Dead! (which gives this compilation its title) is a nice find with her singing "I'm all alone, with a razor in my hand, I remove my watchband, if no one interrupts, when I make this cut, then I'll be Dead!".

Many other versions of the song Dead! exist that are not featured here but should go on future volumes of this series, if more volumes are released. Ede Robin's cover version of Dead! has a boozy soulful vibe and can be found on the Down & Out: The Sad Soul of the Black South compilation. This tune was also covered by Cresa Watson and can be found in a more personally confessional mode on Funk Spectrum III: Real Funk for Real People, but is more soulfully sung here by Carolyn Sullivan.

Interestingly, a version of Dead also showed up on the Blue Thumb compilation from 1972 called Lights Out San Francisco: Voco Presents The Soul Of the Bay Area, an out of print compilation complied by the KSAN radio station DJ which also featured a couple of early tunes by Sylvester.

I think Ace could've skipped some of the more maudlin tunes like The Drunken Driver by Ferlin Husky, Patches by Dickey Lee, Jack Kittel's Psycho, and Betty Barnes's Requiem (For a Girl Born of the Wrong Times), all of which are a little over the top and dated.

The Ace compilation has a somewhat confusing name and artwork. You could be confused that this is a Greatest Hits collection for a band called The Grim Reaper. That and the fact that some classic death discs like The Shangri-Las' Leader of the Pack (as mentioned above, replaced by another great Shangri-Las tune) and Johnny Cymbal's The Water Was Red (a gruesome song from 1961 actually written by Jeff Barry under a pseudonym, about a boy who watches a shark chaw on his girl) were left off. Well, here's hoping Ace sees fit to make this a series of compilations.