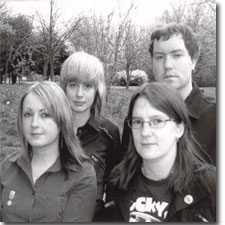 Pale Man Made is a 4 piece band from Newcastle that play guitar based rock like early Delgados.

Stay Prest is a 4 song EP put out by the band to hold over fans till their first full lenth is released. The band has not settled on a label yet, so the opportunity remains for Pale Man Made to become a new sensation in 2006.

The EP starts off with Stay Prest. This is Pale Man Made at their finest. Leon White and Christianne Ormston (both guitarists) trade off vocals to a solid beat blending Sonic Youth's Schizophrenia and PIL's signature song Public Image.

The On Off Inch Scoop starts off with a bass line (with octaves) from Karen Foster that could remind you of the Tubeway Army song My Shadow in Vain. Leon's voice carries the song with Christianne doubling at times.

Sea I Am has lead vocals by Christianne, doing her signature off-key verses before smooth chorus'. After the chorus the song has a bridge that hooks you with the single note bass part synchronizing with Claire Thornton's drum before the vocals come in, followed by a guitar which drives the intensity up for a return to the chorus. Another strong track for the band, and the first keyboards on the record (a single held note sweeping over the loud bridge).

Life Without a Car is my second favorite track on the EP. Though Leon's voice is not like Bobby Wratten in Field Mice, the song has the same light bouyant sound and attractive feel.

I hope that this band finds the attention they deserve. Their releases have been consistently good, and the band does not show any of the wear that new bands can get waiting for the public to catch up with their sound.

Pale Man Made in the gullbuy:

Shook Yang in the gullbuy: