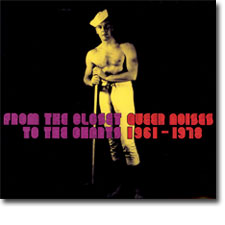 Trikont has put together dozens of interesting themed compilations that always manage to dig deeper than you might expect them to, and always sound great with careful mastering, containing massive booklets filled with information in German and English.

Queer Noises 1961 - 1978: From the Closet to the Charts is a great listen, starting in 1961 with drag queens in vaudeville styled club routines, going through "mid sixties' pop, early seventies' soul and singer songwriters, glitter rock, and punk to end with Sylvester's 1978 You Make Me Feel (Mighty Real) - the first international hit by an out gay performer."

Kay Why? is the 1967 track by The Brothers Butch cited in the liner notes as the inspiration for this compiation. The liner notes point out that there are many tracks that did not make it on the comp due to licensing or taste. Among those 'missing in action' are: Lee Sutton, Lou Reed, David Bowie, Larry Grayson, and John Inman, Lewis Furey, the Dynamic Superiors, the Rolling Stones [supposedly contract breaking] C*cksucker's Blues, and expose items like The Gay Teenager from 1968.

There ARE some big names on the disc. The Kinks' See My Friend sounds great with sitars in a psyche-pop tune, and The Ramones hustler anthem 53rd and 3rd; Dee Dee's first vocal appearance, singing "then I took out my razorblade, then I did what God forbade, now the cops are after me, but I proved that I'm no sissy."

The Twinkeyz were an 80s SF band with a vocalist who sounds like Lou Reed. Black Randy & The Metro Squad were a 1977 punk band from LA on the infamous Dangerhouse label.

The Miracles recorded Ain‘t Nobody Straight In L. A. after Smokey Robinson stopped working with them. The song is a great disco styled soul track that few have ever heard. It has far more appeal than merely as an obscure novelty, though obscure it surely is.

There are other obscure tracks here as well. Chris Robison led the band Steam (Na Na Hey Hey Kiss Him Goodbye) and Elephant's Memory, and played with John Lennon. His Lookin' For A Boy was an upfront track that we loved releaseing to :write songs that were about me."

Curt Boettcher was instrumental in the sunshine pop bands Sagittarius and Millenium. Astral Cowboy was recorded in 1969 for an unreleased solo album. As the liner notes of the disc poin out, "spacemen and cowboys are two favorite queer metaphor-fantasies, and the shimmering Astral Cowboy combines both to great effect."

Sylvester is a gosepl trained transvestite singer from SF who became a Hi-NRG idol after Patrick Cowley heard him while he was doing lighing for a Sylvester show, and converted his sound to electronic dance, creating the classic track Do You Wanna Funk as well as the included track You Make Me Feel.

Queer Noises 1961 - 1978: From the Closet to the Charts is a solid buy that anyone with an open mind will find plenty to like in.

Twinkeyz - Aliens In Our Midst