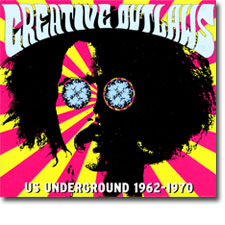 Trikont has put together dozens of interesting themed compilations that always manage to dig deeper than you might expect them to, and always sound great with careful mastering, containing massive booklets filled with information in German and English.

Creative Outlaws: US Underground 1962 - 1970 gaters together tracks that are political or concerned with social change, by bands that may have had success, but always were part of the music underground.

The compiation has a lot of bands whose names you may recognize, but it is not a lazy compiation pooling together the best of the major players. Every track is well-chosen, and the tracks you don't know will surely end up as your favourites on the disc.

The disc opens with Jimi Hendrix doing Star Stangled Banner, taken from his live Band of Gypsys record. While you probably already know his version, it is short, and it sets the spell for the rest of the album very well.

Lothar & the Hand People sound awesome on their 1967 track Machines. The music is really odd and definetely timeless. The track was trom their first (of two) record, Presenting.

Tiny Tim was the odd tall guy with long hair, a high pitched voice and a ukelele. Tip Toe through the Tulips was his classic track, but a 1996 live segue into AC/DC's Highway to Hell is something I had not heard before.

Captain Beefheart was very bizarre, and his Dachau Blues is as out there today as it was when it was recorded in 1969

Country Joe & the Fish have their 20 second Fish Cheer (form the Woodstock soundtrack) melded on to I feel like Im fixin to die, which has hillbilly music and clacking spoons.

Every song on this CD is a treat and fits well in the company of the others. If any of these bands are of interest to you, chances are you will like all of Creative Outlaws, and this CD would be a solid purchase to make.