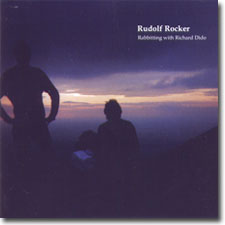 I have never heard of Rudolf Rocker and there is scant information to be found about the band. The first thing one will discover is that the band is named after the German born anarchist and syndicalist ( the doctrine of workers gaining control of the government/economy by a general strike) of the early 1900's. Whether tongue-in-cheek or a direct hit at Franz Ferdinand, the Rocker's first album came out in 1998. I do know that revolutionaries of the early 1900's are very hip in the midst of the first decade of the 21st century.

The band is comprised of two Goodall brothers; Mark on vocals and guitars ,  and Steve on bass, drums and vocals with Jeremy Dyson on keyboards. Dyson is credited with being the token celebrity as his day job on the BBC cult show League of Gentlemen won NME's 2001 award for best TV show. Rudolf Rocker's song Voodoo Lady was part of the show that program. Outside of that the music will have to do all the talking. Not even the Mook Records web site enlightened me. The site's  homemade feeling and awful graphics does more to detract than to attract.

The CD's insert has all the lyrics reversed from  whimsical  low-rez graphics. The back cover of the CD insert contains some highly verbose and referential descriptive copy that reveals little about the band but gives insight to the lyrics origins and influences. The reader learns more about the anarchist rocker than the rockers making the music. Perhaps all this mystery is intentional? It has my interest piqued.

From the start the CD burns. Technically treated wah-wah guitar rises above the delineation of each instrument in the crystal clear mix. Socks and Sandals is the tune and it may be a bad fashion statement but a good tune. Pure pop that is  smart and rollicking. Nice sounds despite the chilly clarity.

The notes on the CD say that the second song, Hijack is a dig on President Bush. The song certainly is upbeat for a derision. The intro is a weird Plan 9 computer-generated, fun house spin. The breezy whistling over  the jogging and jumping drum program is the soundtrack for a sunny stroll or pedal down the lane. The drum is over treated and adds a treacle quality that pushes sweetness to practical plastic and artificiality. I guess the world kinda' sucks but whistle a happy tune and maybe it will lift those spirits.

Chinsmen starts with a distorted yet controlled pop rock multi-track guitar strum. The vocals are less electronic but when the tune settles in the keyboards and drum machine return the song to the borderline of plastic. The mix holds this admirable track back. It is just too overproduced and the song looses all its gusto after the intro riff.

Weak Bridge has a spare, simple drum tap and blends with the percussion to give a westward feel. Horse hoof tapping mix with acoustic guitar is Tex-Mex via Leeds. But the charm dissipates as the track comes into the chorus. The vocals are weak and forced into the musical arrangement. The later guitar solo is a nice touch but the addition of new wave organ is beyond quirky and annoys.

Turner House is hard to grasp. It seems directionless and cold. The vocals approach is the sound of David Gedge of The Wedding Present but far less heartfelt. Maybe more like Hugh Cornwall of The Stranglers? Despite some interesting production the song never finds solid ground.  Turner House locks into a more cohesive course as the guitar solo comes in but the beginning of the track is a road block to the finer points of the destination.

Valley of Desire is starts with a warped, up-beat whistling like Hijack. The sound is Stereo Total's English cousin. The lyrics are as silly as the song. But the song misses the edge straddled by Stereo Total. The edge  between kitsch and serious pop. Deeper into the song it tones down the silly to a seriousness as though they know the sound is getting irritating. The switch seems like a dodge of commitment making it hard to grasp.

Circles loses the overly electronic and produced feel. The song has the most focus and heart. The structure of the song is more understandable. All that silliness is gone. Fat Tuesday also tones down the cuteness but doesn't lose it. I hear the Cure's Close to You. It is those single, tinny, toy, keyboard notes with no sustain or echo. I had high hopes for this song from the introduction but all I can hear is that Cure song and i want to hear some Stereo Total.

Ninth in the CD is See Marker. The intro is secret agent man, Austin Powers with heavy bass and dense guitar chords. The vocals are more a match with the style of this song that touches again on the serious camp of The Stranglers. But it lacks the smarts found in any random Stranglers' track. Same thing goes for Shaky Egg in the tenth position. Some interesting interludes in both and some true pop experimentation makes for a song like a later era Simpson's episodes- great moments but the whole story is average at best because  the plot is all over the place with little focus.

Heresies ends the CD with the best musical intro. The brash guitar butts into a song that has a Moroccan feel. The sound is more Beatnik Filmstars than the poppier references in the earlier tracks. I think that this is the strongest track on the CD. Great psych organ and flaming guitar gives a rough garage/basement feel. I can still hear The Stranglers. There still is that odd mix to the production where the drums and rhythm sound overly treated and stand out but should blend in. That being said, this is the best track.

I don't see anything anarchistic about this CD. I don't see the proletariats having an uprising that rallies around any track that appears on this CD. Perhaps that is more of the irony and mystique that is Rudolf Rocker, the band. But outside of some good pop hooks, interesting, off-beat compositions the revolution lacks a real manifesto. Without a credo it is just some guys from Leeds that make some decent pop with humor and more brains then most of the top of the pop charts.

There will be no major success from the Rabbitting with Richard Dido but I don't think that is what the Rockers really are looking for. But with a better ear for the mix and warmer production there may be better music to come. That is not likely with a band that releases an album every eight years. Like the songs on this album, either get serious or sink.