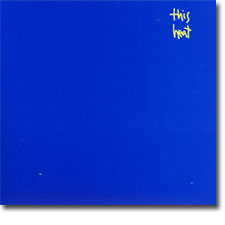 The debut album from This Heat gets the reissue treatment on This Is label after years of various versions being out of print. Recorded between 1976 and 1978 by Charles Hayward, Charles Bullen and Gareth Williams, and released on David Cunningham's Piano label in 1979, This Heat's debut album is a classic album that was years in the making and years ahead of its time.

This Heat combine an experimental tape collage sound with a more rocking sound influenced by krautrock, and other worldly sounds for a perfect hybrid of sound and experimental rock.

This album feels like a suite of music meant to be heard in one sitting even though it was recorded over a number of years, and has a variety of textures and sounds.

The album is bookended by two tracks called Testcard that sound like something you would use to test your stereo speakers. The rest of the album is filled with

This Heat on the gullbuy: