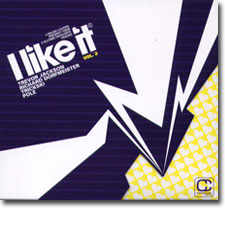 It's been quite awhile since the first I Like It compilation came out, so long I wondered if they were planning to follow up what was a unique idea at the time. This time around the Compost label asked 4 more people - Trevor Jackson (of Playgroup and Output Recordings fame), Stefan Betke (aka Pole) Richard Dorfmeister (from Kruder & Dorfmeister), and DJ-duo Trickski from Poland - to pick 3 tracks that are classic, unique or favorites. It's a unique way to delve into the influences of the artists doing the selecting, as well as delve into some music you may not have heard.

The collection starts out strong with the Trevor Jackson selections. The Colourbox cover of Augustus Pablo's Baby I Love You So originally released on 4AD in 1986 pointed the way to the dub pop of the 90s from Saint Etienne and Massive Attack (there's even samples from Escape From New York which remind me of the sampling done by Saint Etienne).

Julian Jonah's Jealousy And Lies was originally released on the Cooltempo label in 1988 and was featured on the massive History Of House Music boxset from 1989. It's got the old school rhythm box sound you'd expect, but with a more laidback vibe which gives it a soulfulness.

Propaganda's Echo Of Frozen Faces was originally released as the b-side to the P: Machinery 12 inch on ZTT Records, and features some mad saxophone from Simon Lloyd and some off the wall vocals from Claudia Brücken. It was later compiled on the 2002 collection of remixes Outside World.

I wasn't crazy about the selections from Pole (with Headset's Japanese rap in Grasping Claw being the only interesting selection), but Richard Dorfmeister selections were spot on and quite able to show an influence on the sound of Kruder & Dorfmeister.

I had been wondering about Friedrich Gulda - he is an Austrian pianist who rode the line between classical and jazz and who released some albums on the MPS label including this solo piano selection from 1969 called The Air From Other Planets. For those interested in the MPS sound, check this out.

Allez Allez's African Queen was originally released as a single on Scalp Records and later on the album of the same name in 1981. The track was also included on the 2005 compilation of new wave music called Bel 80. This track has a quirky afro jazz sound to it which belies the groups Netherlands home.

Shikako Maru Ten was originally the b-side to Can's single, Spoon in 1972, and because it was a 7 inch it was uber short (only 2 mintes long). It can also be found on Cannibalism 2 from 1990 and the Russian bootleg Radio Waves which compiled rare, live and unreleased tracks between 1969-1972. It's all too brief, but still enjoyable Can at their best.

Trickski are a Sonar Kollektiv/Compost Records trio of DJ's from Poland with not as much history as the other artists making selections here. It's too bad Compost felt the need to pimp this work out to one of their own artists, but for the most part their selections are all right.

Dave Peoples & Walt J's Starting Over is a Detroit techno track, Elbee Bad's Just Don't Stop The Dance is a house track with minimal vocals saying "Just don't stop the dance" with cheesey synths, and the best of their selections are P-Funk All Stars' Hydraulic Pump.

Hydraulic Pump was originally released as a 12 inch and as a track from the 1983 album Urban Dancefloor Gorillas. Urban Dancefloor Gorillas was an all star bash featuring Bootsy Collins, Eddie Hazel, Sly Stone, Bobby Womack, Fred Wesley, Maceo Parker, and of course, George Clinton. This track was produced by George Clinton and Sly Stone and is a sweet funk jam that makes for a fiery end to the set.

There's also an added bonus track - Trickski's Hormony taken from the split 12 inch with Julius Kammerl called Compost Black Label #1. It's not too shabby, but sounds like kids in their bedroom next to the classic material.