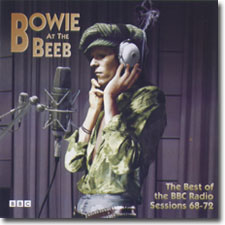 Odd and fascinating, enigmatic and prolific, David Bowie has slogged and hashed his way through the world of rock since 1964. Obsessively releasing music while passing through styles, looks, sounds and images as he stayed fresh and current. No small task. Along the way he has been friend, compatriot, coworker with a cadre of legendary artists that changed the face of pop and art-rock. Lou Reed, Marc Bolan, John Lennon, Brian Eno are at the top of the list. No easy feat to have staying power and the respect of your peers and tending to a finely tuned ear to new sounds from the future.

Bowie is attributed to a quote that resonates in my head and through society-at-large, "It is not who does it first but who does it second". Bowie always seems to have made his career by absorbing all that goes on around him and acting as a filter that condenses and crystallizes musical styles to the essence that bridges the gap of pure art into accessible pop that retains edginess but is inviting and a little scary.

Bowie is rock and roll's Andy Warhol. What is really shocking about a Brillo box? What is really so shocking about Rebel, Rebel? In keeping with the attributed quote and Warhol reference, I never really thought that Bowie was all that original. As I get older I see him more as a rip-off artist in crazed attire and make-up and adopting every rock cliché; drugs, gender bending sexuality, hair, ego-obsessive and maniacal intentions of success. He would steal/borrow and recreate along with his in-tow freak show. He would get the attention that he sought as he battled and scratched his way to the place he ultimately wanted as his destination. Iconic status.

In this 2-CD collection of unreleased BBC recordings of David Bowie's infancy as a solo aritst, Bowie at the Beeb, you hear the BBC in-studio performances of his music from 1968-72. All the image is stripped away of the flash and what is left behind is a group of dedicated musicians in a studio executing and recording their craft. Despite the image, Bowie and his band could play and reinterpret with true heart, soul and ingenuity. Bowie under all the make-up, costumes and hair was a prolific and compulsive songwriter. This release confirms what this.

The music on the 2CDs has been available as bootlegs. A crazed Bowie fan might not hear anything new on the Beeb CDs. To the general listener and fan you are treated to loose and relaxed performances that seem homey and warm. Every track exposes that Bowie and the musician he worked with had the chops and were no an act. At the heart they were sincere and masterful rock talents. The intimacy of these recordings is inviting and approachable. With interviews used as interlude and intros, you are there at a time when pop and rock struggled to find a place on mainstream English radio. The austere BBC "personalities" seem so prim and we know Bowie. It makes a great juxtaposition. Listening to the CDS is like listening to BBC radio and John Peel is still young and alive. Bowie's young again and it was the beginning of a new era in rock.

The first CD of The Beeb sessions spans 1968-1971 performances from five different sessions. Some sessions get one song and some are as many as five. Outside of three cover songs, Jacques Brel's Amsterdam, Chuck Berry's Almost Grown and Ron Davies It Ain't Easy (a great track), CD1 is all Bowie's songwriting. The start is folksy and acoustic post-Davie Jones (his original name) garage -blues band days. The sessions build up to phase shifting psych and ending at the precipice of his Ziggy Stardust image and moniker.

The arrangements and guitar work are superb. The vocals are clean and have a slight rasp from overly used vocal chords. The sound is not of stellar quality with some hissing and muddiness but there are still great moments. The listener must forgive the times and technology when the sessions were performed. Musically and lyrically the sound jumps out on tracks like, Karma Man, Let me Sleep Beside You, Janine, The Width of a Circle, Kooks and It Ain't Easy. It is hard to conceptualize that these songs are from 37 years ago. It is easy to see that Bowie had a burning passion and an inexhaustible musical appetite along with hindsight and foresight. Bowie's song writing and vocals, Mick Ronson's guitar work meld old time soul, blues, and pop into a legendary sound that is still fresh despite the sound quality of the archive.

CD 2 is also five sessions of songs from a six-month period from late 1971 to the spring of 1972. Here we get Bowie at his most controversial and flamboyant. The work now takes on the persona of the gender-neutral alien who has "fallen to earth" and reinterpreted what he has observed and is here to serve it up to man. But ya' know. It isn't that scary and hearing the Ziggy Stardust Bowie stripped away of the pagentry and put into intimate enclosed surroundings-it isn't so scary. It only rock-and-roll. In 1971 this was all alien.

The recording is not much better on CD 2. The less instruments in the arrangement, the clearer the sound. Like CD 1 the sound is looser. The music is now the show. The essence is folk pop, funk bass and guitar blues and nasty guitar licks. Hang On To Yourself hacks in with the true origins of Bowie's sound, his signature vocals and Mick Ronson. These are serious chops. A loose and personal version of Ziggy Stardust still catches at the epic guitar lures and hooks but the production holds you from the full grandeur. Both songs are reprised on CD 2. Hang On #2 is tighter and truer. The edge is there and the handclaps are audible with better production. Something has happened in the three months. Ziggy Stardust comes back with more precision. The mix is better and has that live personal quality.

Bowie pays respects and kinship to the Velvet Underground with his interpretations of I'm Waiting For The Man and White Light/White Heat. Later Bowie produces Lou Reed's Transformer and Bowie's bass player appears on the Take a Walk on the Wild Side. He nods to The Pretty Things with Oh! You Pretty Things and is one of the brightest moments on second disc. Andy Warhol, Bowie's aural biography to the Pop artist appears and is also a stand out track. From these references and homages you can see his inspirations and compatriots. With the earlier recordings, less instruments the better the production quality.

This collection is really not for the casual fan. If you are an archivist, a fanatic and truly want to hear alternative versions to some of Bowie's more memorable songs, this is a nice compilation of talented musicianship. No "digital" quality recordings here. This is digital analog. You get to experience the birth of David Bowie without all the flash.

I realize now the genius of Bowie. His amazing talents and endless appetite for sounds were experienced and remixed through his mind. In a progression the originals inspire another generation that personalizes the original. The next in the progression then does the same. Bowie's talent was just that progression mixed with show and shock and going to extremes to get the music out to people. If this was so alien, he became the alien. It wasn't rock-and-roll it was genocide. A whole history of music had to be killed to hear the alien sounds that weren't really all that scary.

Under all of Bowie's guises, trajectories and incarnations he really is a true talent that deserves the status of those he collaborated with and emulated. He is now a legend. Bowie's talent is beyond The Stones, Beatles and U2. No one person in rock music has changed, stretched and been eaten by the mass consumer culture to come out the other end still smelling sweet enough to be accepted yet still pungent enough to defile and scare. He is a visionary with a dedication that is singular and seldom surpassed. When there wasn't a world for him. Bowie carved his own tributary that has eroded a path large enough for himself and all other oddities to speed to their obscure destinations.