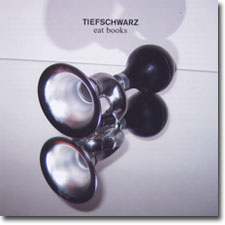 Tiefschwarz (brothers Alexander and Sebastian Schwarz) always had a way of making other peoples music sound hyperreal, but sadly their attempt at their own version of the hyperreal sound on their own album doesn't hold up as well as their remixes for others. So, while their mix of guitars and electronics far out shines stuff like Soulwax's latest endeavors, there's still no masterpiece in Eat Books, Tiefschwarz's second album.

For starters, the album is plagued with the most common ailment of the modern electronic album: too many collaborations. Too many collaborations means, the album never really gets a sound you can latch onto. Sure, there's the trademark Tiefschwarz production sound, but with songwriting that isn't up too par in many places, the production can't really save the whole album.

Tiefschwarz are joined by Matt Safer from The Rapture, Tracey Thorn from Everything But The Girl, members of Chikinki, Ed Laliq, Smallboy, Malte Schlorf and Eric D. Clark.

Also, the Tiefschwarz hyperreal sound, is a sound on overdrive, pumping away, and that's what Eat Books is for most of its time, fast-paced tunes that are great to workout to, drive to (don't get stuck in traffic though!), or do housework to, but after an hour of this stuff you'll be worn out.

The album starts out with the collaboration with Matt Safer from The Rapture on Warning Siren, which is also one of the singles released from the album. The track has some promising house strings, and a slinky bassline, but they don't seem to know what to do with Matt Safer's Cure-like vocals, which are tense but the music isn't as tense as The Rapture usually is.

Ed Laliq previously remixed In Flagranti's Just Gazing on Kill The DJ Records, and here he is featured on Troubled Man and Wheels of Fortune. Troubled Man has Gary Numan electronics and one of the most annoying lyrics on the album, while Wheels of Fortune has Ed Laliq emoting soulfully, but with lyrics that don't really add up to much.

Chikinki have an album on Kitty-Yo called Lick Your Ticket, and here they are featured on the single Wait & See (which is also included as a video) and Artificial Chemicals. Wait & See definitely has single worthy electronics, but some banal lyrics and grating vocals from Chikinki. Artificial Chemicals has a Buzzcocks melody gone electronic, and also starts out promising, with more subtle vocals from Chikinki, but the chorus isn't as catchy as Wait & See. It's a wait and see game to see if something truly memorable will come from Chikinki.

One of the best tracks features the little known Smallboy who has a handful of remixes under his belt. Original has the most manipulation on the vocals and grooves along nicely with sweeping synths and a house beating beat that builds up nicely.

Damage, the track featuring Tracey Thorn from Everything But The Girl will no doubt be the highlight for most, especially those who love the Tracey Thorn vocal style. It sounds like they're trying to recreate the Goldfrapp sound (Tiefschwarz remixed Goldfrapp's Ooh La La), with lyrics emulating New Order like "Damage...in a lonely place." Just when the track gets going it ends at the 4 and a half minute mark.

Malte Schlorf, who appears on Losoul's You Know on the Neo.Pop 05 compilation, gives Schmetterlingsflügel a Germanic flare singing in German and is the only track showing Tiefschwarz Germanic roots.

Eric D. Clark appears on Tiefschwarz's Blow on the International DeeJay Gigolos CD Eight and F.U.N. compilations, and their second collaboration with him, Benedict, is a highlight of this album too.

Unlike the previous two tracks, this track is given the chance to extend out for 6 and a half minutes. Because Tiefschwarz remix of Kelis' Trick Me was bootlegged and pressed up in a one sided 12 inch and distributed through all the independent record shops (and it wasn't featured on Misch Masch), Tiefschwarz felt the need to revisit the sound they mined on that track by using virtually the same backing track on their collaboration with Eric D. Clark. There are some interesting improvements in the electronics, but Eric D. Clark's vocals don't match the tension in the Kelis vocal. Still, this is a highlight of the album, even if it is a rehash.

The handful of instrumentals (Far East, Fly, and Issst) that flesh out the rest of the album, on their own would work better. Included in an album filled to the brim they feel like a holding pattern, tracks that are just filling a void where Tiefschwarz couldn't find anymore collaborators. These tracks are a good way to hear the Tiefschwarz sound unhindered by the vocals, but I wonder if Tiefschwarz are really at their best when they are remixing another artist's vision.