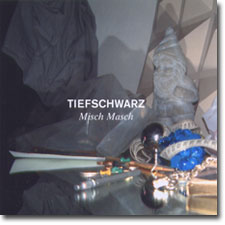 Tiefschwarz return in 2004 after a 2002 debut album called Ral 9005, numerous 12 inch singles and remixes that have appeared strewn on compilation and singles like Chicks On Speed's We Don't Play Guitars, Bugged Out! presents Suck My Deck: Ivan Smagghe and F.U.N. with a whopping 2 cd set called Misch Masch which collects a mix cd on disc one and 11 remixes on disc two. It truly is a mix and a mash of a lot of good Tiefschwarz music.

Tiefschwarz combine together elements of house and old school techno for a hybrid and dirty sounding electronic music that takes some getting used to. Songs will have over the top vocals, house string effects, techno rhythms and an industrial edge which makes the music both exciting and hard to swallow upon first listen. But once you've gotten into their sound signature, the Tiefschwarz misch masch is an addictive thing worth seeking out.

Their mix cd is not unlike the one that Ivan Smagghe from Black Strobe put together for Bugged Out! presents Suck My Deck. But where Ivan Smagghe may have left people wondering if his mix was something from the 1990s Tiefschwarz are more able to combine the modern sounds of the likes of André Kraml's Safari which combines a laidback groove with a soulful Stones inspired vocal and the Detroit dub soul of Mathew Jonson's pulsating Folding Space. His Decompression is also used later in the mix.

Dominik Eulberg is able to combine a slinky underbelly with some ambient effects which work really well to create a naturalistic style on his Adler track here. Max Durante & Keith Tucker's Digital System combines vocodered vocal track with a sample of HAL9000 from the film 2001 to fine effect.

For those who feel lost in the vocoders and samples there's always the Tiga remix of the Drama Society's Crying Hero which adds a human touch midway through the mix. Kiki joins us with the title track from his recent album Run With Me. Tiefschwarz even include Joakim remix of Severed Heads' Dead Eyes Opened just like Ivan Smagghe did for his mix. This leads perfectly into the setclosing organic house of Popular Computer's I Can't Forget You which recalls the best by Kiki.

The remixes disc is just a really handy way to get a whole bunch of the Tiefschwarz remixes all in one place. And while one could complain where is the Chicks On Speed's We Don't Play Guitars remix, aren't you kind of sick of that song? Instead discover some hyperreal mixes from the likes of Micatone's Plastic Bags & Magazines which start things out like a cross between Luciano and a female Louie Austen. If that is too female house vocal for you, check out the slinky feel of Unit 4's Bodydub.

Phonique's The Red Dress works perfectly in a mix environment (just witness Ivan Smagghes use of it on his Bugged Out! presents Suck My Deck compilation). Lopazz's I Need Ya is the type of the track which would then send a mix over the edge. Spektrum hone a sound anchored in the Playgroup bass sound and the Tiefschwarz remix of Kinda New creates an industrial edged Black Strobe styled track which moves right along.

Included is the dub version of Tiefschwarz's own Blow featuring Eric D. Clark which loses some of the gothic overtones of the original which may have scared some away replacing it with a pulsing industrial edge.

DJ Hell's collaboration with Alan Vega from earlier this year, Listen To The Hiss, gets the Tiefschwarz remix and becomes less tribal than the original and more industrial in the process. The unreleased dub version of Trüby Trio's Universal Love adds some much needed edge to a rather laidback jazz inspired track.

What it comes down to is the fact that Tiefschwarz have a way of improving on many of the tracks they remix - which warranted this much needed compilation.