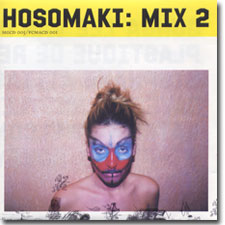 Released 4 years after Volume 1, Hosomaki: Mix 2 is not actually a dj mix cd as the name might imply, but rather a collection of some up and coming electronic artists from Switzerland who found a home at Mental Groove circa 2003. Many of these artists have become names to watch and includes 16 tracks by Gunga, Lee Van Dowski, Luciano, Plastique De Reve, Le Coeur, Stephane Attias, //DIY, Cassy & Dave The Hustler, MPC, Bauchamp, Katewax, Welcom, Velma, St-Plomb, Honey For Petzi and Ad’s.

Where the Where is Here compilation seemed to veer towards the 12 inch single a-side and feature some more in your face sides, Hosomaki: Mix 2 tends towards the more laidback approach. And while Where is Here may come out of the gate first with more memorable tunes, I think with its 16 tracks and ever developing vibe, it's Hosomaki: Mix 2 that comes off as more consistent. I found myself enjoying this compilation as a whole much more than Where is Here where I was drawn to certain tracks again and again.

Süsouk by Gunga starts things out on a mellow dub groove with slow motion effects and solid, icy rhythms. Lee Van Dowski's Micha (who has worked with Quenum on the Cadenza label) sets its sights on the angular dub instead for a track of broken dub beauty. Luciano's Future Senses again brings in the glacial purity for a bed of developing dub which works wonders for the spoken lyrics of Francisca Leon. Future Senses eventually ended up on the Lucien-n-Luciano Blind Behaviour disc which is a favorite this past year.

Plastique De Reve has recorded for International Deejay Gigolos and Lost In Kyoto sounds like it would fit nicely on a Gigolo compilation with its rolling synth sound.

Le Coeur had a full cd on Mental Groove called Suddenly. Le Coeur's Phdeo Trace starts out with a great sample from the film American Beauty (when two of the characters are smoking pot behind a building and the caterer boss fires one of them and the reply is "I quit. So you don't have to pay me. Now leave me alone." followed by an expletive). The rest of the track is really fine too.

Bauchamp's Balancoire Automatique has a great bassline and slightly over the top synthline but it doesn't seem like they've followed up this groover with any other music which is a shame.

Katewax has an electronic blues in Angel Blues and more worth checking out at her website to follow up on her on the lips of Miss Kittin sound. If your thing is electronics with female vocals then check her out.

With tracks appearing on compilations like Tiga's DJ Kicks, Ivan Smagghe's How to Kill the DJ, and Mental Groove's own Where is Here, St-Plomb has been an emerging favorite of mine - and Bulanko is no exception with its building wall of samples, sub beat bass and dubbed effects.