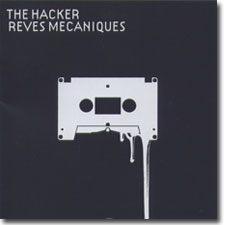 Michael Amato is The Hacker. He lives in Grenoble, in the Alpine region of SouthWest France. He rose to fame as half of Miss Kittin & The Hacker. He also runs the label Goodlife Records, which has put out many records that probably are good, but definitely are hard to find.

Reves Mecaniques is his first solo album, and the all-important first release since all the fame he received with Miss Kittin.

The record has seven instrumentals and three vocal collaborations. The record opens with Flesh and Bone, with Ian Clarke of Perspects singing an industrial EBM (Electronic Body Music) sounding track. Later in the record, Mount Sims sings Traces, which shares a similar sound. Miss Kittin sings (rather speaks) the words for Masterplan; my favorite of the vocal tracks.

Flesh and Bone could be the dark brother of the Peter Shelley song Homosapien, with a coldwave feel replacing the playful feel of Shelley's New Wave classic. Both songs share a pulsing synth and a pop song structure. Traces sounds a bit New Romantic, like Classix Nouveau or Visage.

The instrumental tracks cover a wide range of sounds. The two I like best (Sequenced Life and Radiation) take advantage of good stereo speakers by using electronic sound in really exciting ways. In fact, another of the songs (Village Of The Damned) helped me track a crossover problem in my car stereo with its cleaner-than-ice sharp electronic sounds.

Radiation reminds me of The Normal or Fad Gadget. The music has that Warm Leatherette/TVOD sound.

Electronic Snowflakes sounds like electro-organic electronica - not my favorite sound. It's My Mind has a super solid 4/4 beat, but the sweeping synth sound of classic electronica. The Brutalist is classic acid house techno. Closing track Sleeping Machines brings back the electronica sound, like a modern Vangelis.

Not a record that would advise you to run out and buy, Reves Mecaniques is an interesting disc that skirts many different areas of electronic music. It gives quality doses of several styles (acid, coldwave, EBM, electronica), but lacks the cohesion that the best full length records come upon by magic or design.

The Hacker in the gullbuy:

Goodlife Records in the gullbuy:

Miss Kittin & The Hacker in the gullbuy: