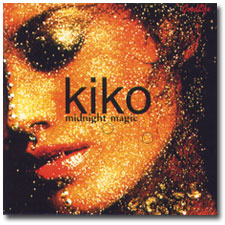 Kiko's debut album Midnight Magic was originally released in France through Goodlife Recordings but became more available thanks to a re-release through PIAS. Kiko originally started out dj-ing parties and raves, then opened up the Ozone store (and label) in his hometown of Grenoble until he finally decided to release a full-length. Working alongside fellow artists like The Hacker and David Carreta, Kiko has kept the magic alive for the italodisco electronic scene.

I think because Kiko started out as a dj he knows full well what will keep people dancing and shaking, and Midnight Magic has a lot of addicictive rhythms. It's like a collection of dance floor 12 inch singles, and while I think the album could have had more depth and more memorable tunes, what it lacks in depth it makes up for in intensity. It's no doubt that Kiko has been in the scene awhile and has stayed true to his techno roots which I commend him for and I quite enjoy that old school feel he adds to the modern sounds. I'd be mighty curious to hear Kiko's more recent venture Sinema, as well as remixes from this album by the likes of The Hacker. I think if Kiko had perhaps worked with some collaborators, it might have helped flesh out this platter. If he keeps up the momentum I think Kiko could get his own following.

My favorite tracks include Monique, Italomatic, Running in the City, and Just Blue. These 4 tracks are well worth the momentum found on this disc. Monique gets things going with a computerized voice and pounding rhythm which brings to mind DJ Tiga. It's kind of like if New Order tried their hand at robotic disco punk. Italomatic has just what the title alludes to - primo slab of italodisco funneled through a techno head. Running in the City and Just Blue both have the production value that Benny Benassi does so well with a distorted echo to the rhythm - crank these two songs up to see what I mean. Running in the City is one of the few songs with outright vocals and they do the song well (sort of like a hyper Tones on Tail meets Tosca). Just Blue is the kind of song that wins me over - straight forward and hard hitting, reminding me of SCSI-9.