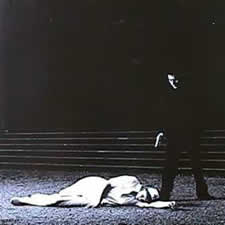 Add a touch of Francoise Cactus, a tip of the hat to Chicks On Speed, and the whole package of ADULT. to the synths of Giorgio Moroder and you will have a hint of what Miss Kittin & The Hacker sound like.

Though Caroline Herve has chosen a similar name to Quintron's cohort Miss Pussycat, the two are quite different. Miss Kittin is from Switzerland, though she has strong connections to France, Germany, and Austria as well.

Miss Kittin's vocals are deliciously bored. To the accompaniment of the pulsing electronics and beat that The Hacker (Michael Amato) creates, she tell tales of her friends or just plain situations she has been in or imagined.

The CD opens with "Life On MTV". The song follows a common path for her, talking about a life of celebrity with champagne gone flat, thrills too easily achieved, with little meaning. The second track "Frank Sinatra" is the best song on the CD. Too bad you will never be able to play it on the air. Her choice of words rivals Peaches on the track.

"Walk On By" is not the Burt Bacharach song. It is a cut that samples a synth sound from the Kraftwerk song "Robots". "1982" was on a 12" and is also on the 'Sweet Electro' CD compilation. It reminds me of Stereo Total's Francoise Cactus in the way she sings the vocals.

"Stock Exchange" (#5) is one of my faves from the disc. It has the Giorgio Moroder synth and a fair amount of energy put into it. "You and Us" is a six minute track that takes one idea and runs with it the whole length. Though this sounds like the recipe for a losing track, Miss Kittin & The Hacker make "You and Us" a manifesto: they describe exactly why they make music, and what it means to them.

"L'Homme Dans L'Ombre" (#8) is one of the more dynamic tracks (like "Stock Exchange"). The vocal effect makes it sound similar to ADULT., though Miss Kittin's accent and the ultra-Giorgio synth separate the sound from ADULT. in the end.

"Stripper" (#11) is my favorite of the songs besides "Frank Sinatra". The lyrics are somewhat simplistic and circular, but the song works. Miss Kittin has been on the tips of many peoples tongues after her work with Felix Da Housecat on his 'Kittenz &Thee Glitz' CD. This record firmly introduces her partner and her into the international underground of music.