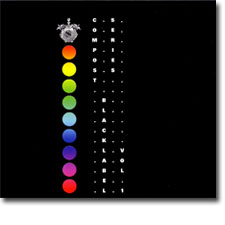 Often the best music from a label is heard on their limited edition 12 inches - items that become coveted by vinyl enthusiasts, and sought after by everyone else. This is the first in a series of cd compilations collecting together the Compost Black Label Series, and it's a compilation that's a collector's dream for those who haven't been collecting the original 12 inches. Compost first gave us a taste of the Black Label Series on the I Like It, Vol. 2, where Trickski's Hormony was added as a bonus track (and it's also included on this compilation). Here we are treated to 13 tracks of prime Compost material.

Made Up from Zwicker (aka Cyril Boehler) features the coolly sensuous vocals of Olivera Stanimirov (who also sings with Seelenluft), supported by the bubbly slap synth bass of Flo Götte. Syrup's 51 Cents Left has an electro Prince sound to it with its thick electro bass, funk styled guitars and dub inflected accents.

Lopazz (aka Stefan Eichinger) works with Casio Casino (aka Steffen Neuert) on Child Of Dance with its pulsing electronic bass, frantic funk guitar and sweeping synths. A second Lopazz track called Estrella rounds out the entire compilation with a mellow jazz vibe and some sweet subtle female vocals.

Keisuke Suzuki's Water Samba is an electronic samba track with echoed keyboards and an eventual synth bass. Phreek Plus One (Alessandro Cattenati and Ivan Savoldi) give us the disco beat, Italian style in Boogie Beat with a funky slap rhythm and pulsing synths that builds cosmically.

Compost Black Label Series Vol 1 is a great way to hear these select 12 inch tracks and some new up and coming artists.