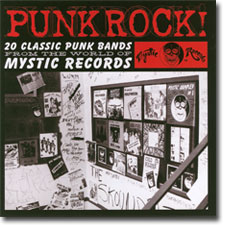 Mystic Records was run by Doug Moody, an industry veteran who saw a market in releasing small run singles and compilations by up and coming LA hardcore bands. Some of his bands became huge in the scene, and some of them became cult bands cherished by only a few.

The disc opens with the first ever Suicidal Tendencies single, later re-recorded as a track fro their debut album.

Doggy Style was an Orange County (OC) band that blasted onto the scene through their EPs and compilation tracks on Mystic. Though Do It Doggy Style is their most memorable song, Donut Shop Rock is one of their best as well.

White Flag's Shattered Badge is taken from Mystic's excellent songs about Policemen themed The Sound of Hollywood COPulation LP comp. That compilation is probably my favorite ever Mystic comp, especially The Authorities I Hate Cops. If you decide to track down only one original Mystic comp, I recommend this be the one.

Powertrip was the Motorhead-like band formed by Angry Samoans frontman Jeff Dahl after the Samoans split. Like all projects he sings and plays on, it has a distinctive sound and is one of the highlights on the comp.

Sado Nation's Fear of Failure is a one minute female vocal fast hardcore track that sounds similar to another band of the period, Sin 34. It is one of the highlights of this comp.

Some of the Mystic comps that still survive in my collection:

Punk Rock! 20 Classic Punk Bands from the Vaults of Mystic Records does not have MANY of the tracks I loved on the label, but is is a great overview of Mystic, and the sound quality and packaging are very good.