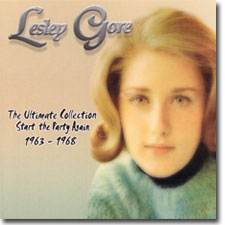 Australia's Raven Records has been quietly putting out superb single disc compilations for 60s and 70s artists like Sandy Posey and Crazy Horse. Start the Party Again was one of the very first, originally released in 1997, but just in the past year, it was refurbished with two extra tracks (I Don't Wanna Be A Loser and Hey Now were added) and better sound quality. If you missed it the first time around, and still need a great single disc Lesley Gore collection, now is your chance to pick this one up.

Start the Party Again includes all of Lesley Gore's single releases from 1963 and 1964 and her biggest hits including It's My Party, Judy's Turn to Cry, She's A Fool, You Don't Own Me, That's the Way Boys Are, I Don't Wanna Be A Loser, Maybe I Know, Hey Now, and Look of Love. Along with this, many of their b-sides are here too, including Just Let Me Cry, The Old Crowd, Run Bobby, Run, Wonder Boy, and Sometimes I Wish I Were A Boy. These songs constitute her earliest recordings and her biggest hits, most of which are still remembered fondly today for their impeccable Quincy Jones production, and Claus Ogerman arrangements.

Lesley was also releasing full length albums in these first couple of years with a few gems buried on them, but for the most part these albums, including I'll Cry If I Want To, Lesley Gore Sings of Mixed-Up Hearts, Boys, Boys, Boys and Girl Talk were vehicles to spotlight her singles. Raven misses a few of these buried album gems, like the Lesley Gore penned Leave Me Alone and I'm Coolin', No Foolin' which are both fan favorites and early examples of Lesley's songwriting ability.

It wasn't until her 6th album My Town, My Guy and Me (following the release of her 5th album which was a best of called The Golden Hits of Lesley Gore, again used to spotlight her singles) in the fall of 1965 that Lesley Gore released what is considered her best album filled with her most inspired work.

In fact, Mercury Records was so bummed that Lesley had decided to finish out college, that they released a version of Sunshine, Lollipops and Rainbows (included here) in June 1965, a song that was originally released on the Lesley Gore Sings of Mixed-Up Hearts album released in November of 1963. This redone version was also included on The Golden Hits of Lesley Gore and featured in the movie Ski Party (a Frankie Avalon beach party type movie set on the slopes) with Lesley singing it on a bus.

Whatever it took, Lesley Gore was able to put her all into the My Town, My Guy and Me album with Jack Nitzsche's help, and Raven has included a bunch of tracks from it like the title track, No Matter What You Do (a blazing rocker co-penned by Dick St John, one half of Dick & Dee Dee), You Didn't Look Around (another song in the long line of loser themed songs Gore recorded), I Don't Care (written by Madara & White, who also wrote Lesley's feminist anthem You Don't Own Me and most of the Party With The Pixies Three album which show how versatile a songwriting team these two were), What's A Girl Supposed To Do? (a Shangri-Las song) and What Am I Gonna Do With You? (sadly not the alternate double tracked vocal version originally released on mono versions of the My Town, My Guy and Me album that has yet to be released on cd).

As this Raven compilation comes to an end, there's less room left on this 32 track disc for every released single or favorite album track, so only We Know We're in Love and Young Love are included from the 1966 Lesley Gore Sings All About Love album. By this point, Lesley had moved on to work with Shelby Singleton (the producer who discovered Jeannie C. Riley of Harper Valley P.T.A. fame) and Alan Lorber (arranger who worked with Gene Pitney, and later created the Bosstown Sound) on this record and their influence can be felt in Lesley's cover of Sonny James' 50s country hit Young Love.

We Know We're in Love is a showstopping tune written by Lesley and her brother Michael (the two of them would end up writing the award winning Out Here On My Own for the musical Fame, but she and her brother both spent time writing songsat a very young age, sometimes even for other acts like Ginny Tiu and the Few's Let Me Get Through To You Baby which Michael Gore wrote with Carole Bayer but was surprisingly never recorded or released by Lesley). We Know We're in Love was also featured in one of Lesley's tv appearances she was making around this time on The Donna Reed Show.

Off and Running (a song also done by The Mindbenders) was released as a single around the same time as We Know We're in Love and Young Love but wasn't released on album until California Nights was released in May of 1967. Also included on the California Nights album is the superb title track (also recorded by The Four King Cousins) which is featured in Lesley's appearance as Pussycat in the Batman tv show.

Two other singles with a similar sound released in 1967 that weren't included on the California Nights album are Summer and Sandy and Brink of Disaster. All of these late 60s songs sound much clearer and less distorted than I've heard on previous cd compilations and make this cd worth picking up.

Oddly, instead of rounding out this compilation with Lesley's other late 60s singles like He Gives Me Love (La La La), I Can't Make It Without You, I'll Be Standing By, 98.6/Lazy Day, or Wedding Bell Blues, Raven decided to include Start the Party Again (of course) and some of her early 60s German recordings of Sieben Girls, Goodbye Tony (You Don't Own Me re-written for the German market), and Nur Du Ganz Allein (It's Gotta Be You). Including these German recordings which can be found on the massive Bear Family boxset (fittingly, since that's a German label) is the one big mistake Raven made with this compilation which otherwise could've been definitive.

Lesley Gore in the gullbuy:

Raven Records in the gullbuy: