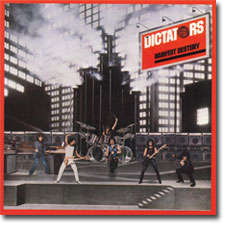 Manifest Destiny was released in 1977. Even though 1977 is usually considered to be the dawning of the punk rock age, this was the second of three LPs The Dictators put out in the 70's.

The Dictator's sound did not dishonor the (at the time) recent past of rock as bands as Ramones, Richard Hell & the Voidoids, Dead Boys or Wayne County did. It was a sound rooted in the rock tradition of the 70s, when bands like Blue Oyster Cult, Good Rats and Foghat rocked Long Island.

The Dictators were from Bronx, and brought a tough guy street bravado from their streets to their sound. The principal songwriter was Adny Shernoff. He sang songs, though the 'frontman' of the band was Handsome Dick Manitoba, who sang about half of the tracks. He had a big afro and the comic feel of a professional wrestler.

The album was produced by Blue Oyster Cult managers/producers Sandy Pearlman and Murray Krugman, who made the band sound as polished as Alice Cooper in the hands of Bob Ezrin.

The songs most people remember on Manifest Destiny are the last three. Science Gone Too Far is my personal favorite from the disc, followed closely by Young Fast Scientific. Both have the energy and oddity of The Dictators at their best.

The album closes with a cover of Iggy & the Stooge's Raw Power. It is the only track that kicks into the high gear that punk rock release of the day were expected to.

Manifest Destiny has the most gloss of any Dictators album. That works both for and against it. Most fans consider it the low point of their career, but, like many other records, rediscovering it 30 years later can allow you to view it with a new persepctive, making it a worthy purchase if you call yourself a Distator fan.

The Dictators in the gullbuy: