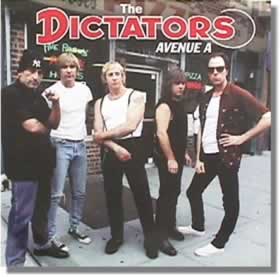 I love electronic instrumentals with beats and robotic sounds. I love heavy dub. And I love The Dictators. Ever since their amazing 'Go Girl Crazy' LP in 1978 this Bronx band has played a music that defied trends. Boycotted by New Yorkers who sided with Wayne County after the incident where he split Dick Manitoba's head open at a Wayne County and the Backstreet Boys show, The Dictators have been outsiders in a genre of outsiders. So it should be little surprise that they have remained friends and have even managed to reform and put out a great CD and several super singles, including this new one.

'Avenue A' is a 10/10 song. I wish I had the lyrics to print, because they are THAT good. 'Avenue A' is an anthem to the first street in NYC's Lower East Side Alphabet City - the area that used to get rougher and rougher as you went from Ave. A to Ave. D. As someone who remembers that area fondly myself, I enjoy The Dictator's take on the gentrification of the area.

On the flip side is a live version of 'New York, New York.' That song first appeared on the 1990 '...And You?' CD by Manitoba's Wild Kingdom, a CD which had several amazing cuts too. Though Manitoba's Wild Kingdom were signed to MCA they never achieved much attention and sadly faded away after the one CD. The version on this 7' is not a noisy live version - it sounds perfectly fine to me, in fact it sounds great. Like 'Avenue A', 'New York, New York' has great lyrics and a great tune. It is classic Dictators.

If you ever liked The Dictators you would do well to listen to this. It is not a reworking of past songs for a new generation of fans - it is a continuation of the 'on their own terms' integrity that made The Dictators so important to so many people through the years.

If you never heard The Dictators, they were the 'Clown Prince of Crime' jokers that played their instruments too well to fit in with the downtown punkers, yet were too outrageous for the suburban clubs. They were fronted by Handsome Dick Manitoba, an afro wearing Bronx kid pretending to be a professional wrestler (before such a thing was popular). Dick didn't even sing that many of their songs - his voice was too bad! They put the 'rock' in punk, and wrote clever pop tunes with memorable lyrics. ...Like they are doing today.

The Dictators in the gullbuy: