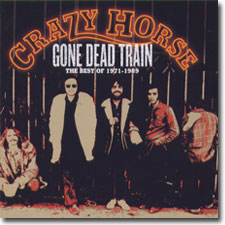 Gone Dead Train gathers together 20 tracks of the band Crazy Horse through many incarnations, from their 1971 debut as The Rockets all the way up to 1989.

Parts of this CD are so much better than I had bargained for them to be. I bought Gone Dead Train becuase I like early Neil Young: especially Tonights The Night, Time Fades Away, On the Beach and Zuma.

Crazy Horse are mostly known as the backing band for Neil Young. The band has always incuded Ralph Molina (drums) and Billy Talbot (bass), encompassing many other players during its long career. As the excellent liner notes of this CD tell us, the first time the name Crazy Horse was on a record cover was on the Neil Young & Crazy Horse record Everybody Knows This Is Nowhere. The fact is that Crazy Horse had already been a fully realized band called The Rockets, with an LP and a sound that Neil Young admired and used as his own. The Everybody Knows... record even had a song written for them, Running Dry (Requiem for the Rockets).

The guitar solos blaze . Would you have thought that Danny Whitten played lead guitar in a style that could have provided influence for both Johnny Thunders and Ace Frehley? Listen to this CD and you will believe.

The connection with Johnny Thunders continues when you listen to Downtown or Pills Blues, a counterpart to the New York Dolls song Pills. Pills Blues was written by George Whitsell, one of the three new members that joined in 1972 to replace Danny Whitten and sessionmen Nils Lofgren and Jack Nitzsche, who played on the 1971 self-titled debut. A live version of Downtown with Danny Whitten singing later appeared on the Neil Young record Tonights the Night. Downtown is a tribute to copping drugs, just as surely as Heartbreakers Chinese Rocks was. Sadly, Danny Whitten died from an overdose in the 70s. Even thought he had already been out of the band for a year, the association followed Crazy Horse, and ultimately inspired Neil Young to pen his classic Needle and the Damage Done..

The Danny Whitten song I Don't Want To Talk About It has the same type of acoustic bittersweet sound as You Can't Put Your Arms Around A Memory by Johnny Thunders. It shows the reflective side of Danny as he trys to cope with people trying to deal with him and his problems.

Beggars Day uses as much phase shifted guitar as Frank Marino ever did in Mahogany Rush, and has a guitar riff and vocals that sound like JJ Cale when he played in The Leathercoated Minds.

She's Hot rocks as hard as early Foghat. Downhill provides a blueprint musically and vocally for Meat Puppets. Rock and Roll Band has guitar work that may have inspired Outlaws Green Grass and High Tides. Lady Soul has the same type of lyrics and upbeat feels as any Peter Holsapple song in The dBs.

The 1989 song World of Love shares lyrics ("tin soldiers and Nixon's coming") with Neil Young's classic song Ohio, showing that the relationship between Neil Young and Crazy Horse is enduring. Downhill has a sound anyone familiar with the record Zuma will instantly identify with.

Not all of the CD excels. Child of War could segue into Cult's She Sells Sanctuary without most people realizing a different band was playing. Left For Dead sounds like the Scottish hard rock band Nazareth (mostly remembered for two songs: Hair Of The Dog and Love Hurts).

But those big buzzing guitar solos that sting like a bee are everywhere, and Gone Dead Train is a great listen and a worthy buy.