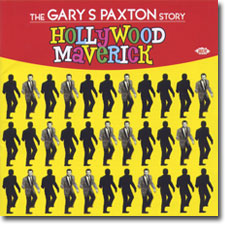 Gary Paxton was an early rock'n'roll journeyman who tried everything once in the music business and Hollywood Maverick: The Gary Paxton Story released by Ace Records from the UK is the most all encompassing compilation of his work.

Paxton is best known for a couple early 60s hits including The Hollywood Argyles' Alley-Oop (which he recorded with another rock'n'roll journeyman Kim Fowley) and Bobby "Boris" Pickett's Monster Mash, both of which are included in this compilation.

Other compilations which spotlighted a more focused light on certain genres Paxton worked in include Beach Party - Garpax Surf'n'Drag (a compilation of surf and hot rod music produced by Paxton) and Boy Trouble: Garpax Girls (a girl group compilation, the best of which was from The Rev-Lons and Beverly Williams).

Hollywood Maverick has a more general overview of Paxton's production, from his early days of Everly Brothers styled recordings, to the novelty hits, some girl group sounds, pop vocalists, harmony pop, and ending with his Jesus freak music. And while there are a slew of unissued sides, the best thing about Hollywood Maverick are in fact the liner notes by Alec Palao which shine a spotlight on the backstory of these recordings.

Missing is any of the aforementioned work with Curt Boettcher and The Eternity's Children. Including this here could have fleshed out this compilation, and make it something I would return to more.