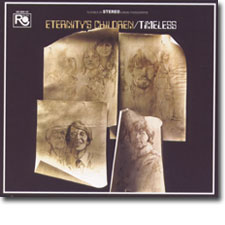 I'm not really sure what the reason Rev-Ola has for reissuing Eternity's Children's two albums again since they previously released both albums plus some bonus singles tracks on one cd in 2002. This time around they've released the two albums separately, along with From Us Unto You: The Complete Singles.

The singles collection also released in 2005 made some sense because it included their ultra rare Apollo and A&M singles, but since both their albums were compiled on one disc, I'm not sure what the point was of reissuing them separately - especially since the original two-fer is still available.

This reissue of Timeless does show this rare album's artwork for the first time on cd, since on the 2002 disc the first album's artwork was used - plus it has been released in a nice cardboard case (but with no liner notes).

Eternity's Children had previously worked with Keith Olsen (a member of the Music Machine, who also worked on Sagittarius' Present Tense, The Millennium's Begin, Emitt Rhodes' self titled album, Lambert & Nuttycombe's second album, As You Will, and Fleetwood Mac's Rumours) and Curt Boettcher (from the Millennium). After brief stints releasing a single on the small Apollo label, a single on A&M and an album for the Tower label, they turned to Gary Paxton to produce their second album. Paxton had worked with Kim Fowley on the Hollywood Argyles' Alley Oop, and also worked as the engineer for The Association and Lee Mallory. Eternity's Children basically existed as two entities, and it was the second lineup that recorded the second album, Timeless. This album for some reason was originally only released in Canada.

Remaining members in this second entity all began adding to the songwriting (and interestingly, Linda Lawley later penned Kiss Me The Way You Did Last Night for The Carpenters, which appeared on their Lovelines collection).

Check out the Boy Trouble: Garpax Girls review for more on other Gary Paxton productions and Jan Paxton's material (where you can hear her singing I've Had Enough Heartaches as Janice Paxton).

I Wanna Be With You, Look Away, and Till I Hear It from You were all singles that also appear on the Complete Singles collection. They show the more soulful pop side of the Eternity's Children, skipping along with a pleasant soulful harmony vibe. I Wanna Be With You kick starts the album in an addictively upbeat manner. Look Away is a summer's over sunshine gem. And Till I Hear It from You is the more mellow he said/she said side of soul with laidback vocals, swirling organ and horns a plenty.

The Other Side of Me has an Association meets Zombies vibe and zips along brightly. Christina in My Dreams actually has a Curt Boettcher/Millennium/Sagittarius vibe to it, with a mallet instrument augmenting the melody and a sweet harpsichord break, all embellished with those sweet sunshine harmonies.

Then there is Sunshine and Flowers, which has the sunshine and flowers vibe you'd expect from a song with that name. Get Outta Here actually jams harder with a Janis Joplin/Big Brother and the Holding Company groove.

Nature's Child has that flower in the hippie's hair sound, while the album closing Thinking Animal is a social conscience song which sounds like it could be the theme song to a cutting edge children's show, if hippies replaced the clowns with mimes dressed as donkeys.

The only song that didn't do much for me was Gypsy Minstrel Man, which is the only time the sun isn't shining even when summer's over.

Eternity's Children in the gullbuy: