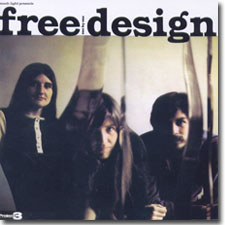 Free Design's 6th and final album recorded for the Project 3 label in 1971 can be seen on many different levels. First and foremost, it's a harmony folk pop gem, with the siblings' vocals (now back to 3 vocalists again like they were on their debut) joining together to create a blissed out harmony tour de force.

On another level, it's a hippie-fied answer to all that was wrong in the world, including the lack of success for the band. And on yet another level, it was the chance for Free Design to stretch out, with guesting musicians augmenting the group's harmonies with a combination of funky, prog influenced tunes, and an array of string and horn arrangements.

The end result doesn't equal the sunshine exuberance or cutting edge harmonies from earlier albums, but does add an inspirational, and yet darker approach to the Free Design sound. Light in the Attic has added some of the most delicious bonus tracks to this reissued cd too, with the addition of five unreleased live tracks recorded with The Birmingham Symphony Orchestra.

One By One sits hand in hand with other albums from around 1971, including the Brian Wilson/Spring album, Judee Sill's two masterful albums, The Carpenters' earlier ones, and Laura Nyro's songwriting style that often cropped up on 5th Dimension's albums (indeed, in the live tracks found here as bonus tracks, Free Design cover Where Do I Go - a song from Hair, which was originally recorded by them on their third album from 1969 called Heaven/Earth and could've been covered by 5th Dimension since they did other songs from Hair).

Free Design were joined by a bevy of session musicians on this album including Randy Brecker on trumpet and flugelhorn, He also recorded on:

Billy Cobham on drums. He also recorded on:

and Stuart Scharf on guitar. He also recorded on:

This coupled with Chris Dedrick's arranging skills, the added strings and the groups own harmony vocals, make One By One a sweet and tasty sounding album.

The album starts out with the catchy One By One, which has lyrics like

The world in pain is more than I can deal with
but people one by one is a different thing
Songs are all I have to try to heal with
Thoughts of peace and love I'll truly sing.

Right away we see the hippie-fied imagery of a world gone wrong, corrected by singing songs together with friends and family. Friendly Man keeps that vibe going, as does the magnum opus which ends the album, Friends (Thank You All), where the group is thankful for their friends in a world of destruction and pain. This love of friends can get a bit much, and ends up sounding shrill on the prog workout that is Friends (Thank You All), but it's still got fabulous harmonies and the jamming musicians going for it.

That's not the worst here though - the worst is their wide eyed, straight as can be, cover of You Are My Sunshine done ballad style (a la The Carpenters or Spring), and when the group tries to get funky on Go Lean On A River, where Chris can be heard singing "You're just another mother fake" sans the girls' harmonies.

The album works best on the piano led numbers (a la Laura Nyro or Judee Sill), like Felt So Good, Going Back, and Like To Love, as well as their incredible take on The Doors' Light My Fire. These originals still have the hippie-fied back to nature approach of the other tracks (where back to nature means doing what you want instead of working slave-like for another entity's dream), but they work much better and sometimes evoke the singer/songwriter, soulful charm that has influenced the quieter moments of modern day groups like Saint Etienne. Light My Fire has some awesome keyboards and horn solos mixing with the groups incredible vocal melody they've infused into this oft covered tune.

I wish at this point I could say to pick up a best of collection to get the best tracks from this album, but surprisingly, tracks like their version of Light My Fire and even the magnum opus Friends (Thank You All) (which is a very interesting failure) don't appear on any of them, but for some reason You Are My Sunshine does.

This Light in the Attic reissue also includes the stunning and fascinating unreleased live recordings with The Birmingham Symphony Orchestra, including versions of One By One, Like To Love, and Friends (Thank You All), along with the cover of Where Do I Go. The best and most fascinating track from this live set is Four Love Seasons, which combines the group's harmonies with the orchestra perfectly in that family harmony, cutting edge arrangement style which sends it far beyond - and it's amazing this track was never recorded in the studio for any of their albums. It's too bad too, because these live recordings come off as mere archival recordings never intended for release.

Free Design in the gullbuy: