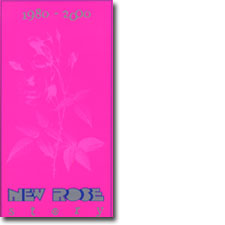 the box includes a 43 page full color glossy booklet that is large (6inch x 12inch) and filled with photos and details about each artist, in French and English.

There are many tracks that you have never heard and will be glad to hear, as well as some tracks you surely will know, especially if you were a fan of the label (that IS why you are reading this, yes?).

The Troggs song is taken from their 1992 New Rose full length Athens, Andover. It is quite great!

Witch Trials is a Jello Biafra side-project. Tazer is taken from a 12inch that was the fifth release ever on New Rose. It is a skone/music piece about a tazer (non-lethal electrocution weapon) demonstation at a Law Enforcement conference.

Joe 'The Count' Viglione is a Boston legend that even recorded a single backed on one side by The Neighborhoods and the other side by La Peste, just after both bands endured a fierce competition at WBCN's first ever Rumble (Neighborhood triumphed). The Rumble has since become a Boston institution, with prize packages worth competing for.

The Dawgs are a Boston band that sound a bit like Atlantics on On The Road To You.

True West do a very nice cover of the Pink Floyd song Lucifer Sam (here called Lucifer's Sam for some reason). The reverb is in all the right places, and the energy level is high.

Shoes were a power pop band whose record Present Tense was loved by many. I never knew that they went synthesizer crazy, as Will You Spin For Me? shows. I guess it is logical, as such pop/electron hybrids as The Cars Candy-O were popular at the time.

Dead Beats are NOT the Dangerhouse band Deadbeats who wrote Kill the Hippies. This band has female vocals. On New Girl they sound kind of like the Primitives, Pretenders or The Motels Only the Lonely.

Mike Wilhelm was a founding member of The Charlatans, later a member of Flamin' Groovies. Me And My Uncle is about the best acoustic guitar/vocal song I can think of. The song also has strings in it, but the major attraction to it is the lyrics, telling a story that is insteresting to hear.

Dramarama is a Boston band that put out several records and enjoy major label attention for awhile in the 80s. Anything Anything is a really fine song about trying anything to get that special girl to marry you.

Blood on the Saddle were part of the LA cowpunk scene populated by artists such as Tex & the Horseheads, Rank & File, and Gun Club. Abilene starts off real sparse and basic, but becomes a rocker as it goes on, sounding a bit like X.

Sirens of 7th Avenue are a London band that use reverb and tremolo on Shine On, which rocks like Metal Urbain.

Pianosaurus' Thriftshoppin is a fun song with a individual take on the toy piano, pre-dating the use of toy piano in indie rock by 20 years. This track was produced by Peter Holsapple of The dBs..

Lolitas were a French band with a female vocalist that reminds me of Stinky Toys or Stereo Total. Tu Me Plais is a little more subdued than either of those bands, but no less enjoyable.

Detroit band The Gories have a primitive sound without a bass player, with a lot of energy - Nytroglycerine rocks hard.

T. Tex Edwards & Out on Parole uses the amplifier's tremolo setting to give his guitar a deep twang on the country-ish The Girl On Death Row. Like many of the best songs in this box set, this one makes my faves list because of the lyrics, and the story they tell.

Moe Tucker was the drummer of the Velvet Underground. Her solo track Too Shy is a song you will want to hear. It is a fast paced rocker taken from her 1981 New Rose full length Playin' Possum.

Is this box set worth buying? At a low price (I found it for less than $25.00 USD) is definitely is. There are a bunch of good tracks you probably won't hear unless you own this disc. There are more good songs than I have detailed. This box overwhelms - I have only detailed my personal faves.