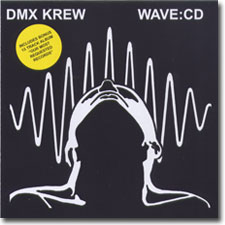 Edward Upton is an English electro artist who has been recording as DMX Krew for almost a decade. Wave:CD is has latest full length [view full discography on discogs.com].

In 1999 I had my hands on the Smash Metal double 7inch split EP between DMX Krew and Chicks On Speed at Covent Garden Rough Trade. When I went back the next day to buy it, it was gone - I have never seen it since. It was the first time I had ever heard of COS. DMX Krew were already on everyone's radar, with many good releases such as the 1997 CD1/CD2 You Can't Hide Your Love EP.

Wave:CD is a two CD set - the first disc is the new record, the second disc has slightly reworked versions of 13 tracks from the DMX Krew catalog. It is this CD that makes the set worth buying. The new record is not very distinctive. There are only 2 songs that stand out on the disc.

William the Conqueror has male vocals that give the track a Depeche Mode feel. It is not the first time DMX Krew have sounded like that band. The bands biggest hit, 17 Ways to Break My Heart (which opens up CD2) is a dead ringer for Depeche Mode, except it is better than anything DM have come up with in years. The lyrics of William the Conqueror tell the story of William, the illegitimate son of the Duke of Normandy.

Echelon has the voice of a screen reader reading a webpage about the global communications interception tool Echelon, over a backing electronic track. The music zips along, and the subject matter is interesting, making this THE standout track from the record.

The second CD in the set is called Our Most Requested Records. It is like a greatest hits record, only the tracks are slightly reworked. I have compared several of the original tracks with the versions on this disc, and they are different, but in ways you may never have noticed if you did not play them side by side.

17 Ways to Break My Heart will always be the band's signature track, and rightly so - it is a fantastic tune that takes the formula pioneered by Depeche Mode and improves upon it.

CD2 - Our Most Requested Records

DMX Krew in the gullbuy: