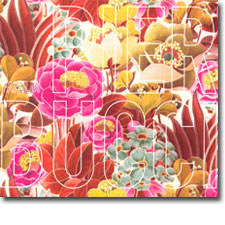 Pier Bucci has appeared on Bugged Out presents Suck My Deck: Damian Lazarus (Crosstown Rebels creator), has a 12 inch single called Skip & Chord on WMF Records with his brother Andres Bucci (the a-side, Dude was featured on the WMF Records compilation Moment), and has worked with Argenis Brito (with whom Bucci also collaborated with on the Cinetico Andino 12 inch, from which Polaris was plucked and used in the Damian Lazarus' Suck My Deck) and Uwe Schmidt as Mambotur.

For Familia, Bucci has turned to Armelle Pioline (co-founder of Holden and Icalma) and Macha for help on the vocals on a few tracks, fleshing out an album of warm microhouse electronica.

Familia is a steady but laidback album that pumps along but never leads one to the dancefloor. It also is for the most part a seamless mix, with the tracks often mixed so that you don't know where one begins and the other ends.

The vocal tracks are the strongest, especially the two tracks early on that feature the ethereal French vocals of Armelle Pioline (Tita and L Nuit).

Tita has a more playful feel thanks to Armelle's vocals, the one finger synth melody and the minimal blipped synths. L Nuit has a more contemplative echoed vocal sound which counters the tweaked synths and pulsing micro rhythms perfectly. As with many albums that mix between the tracks, L Nuit has two sections, the building up early part and then the thick bass synth second part, so it's like hearing two different versions in one track.

Immediately following L Nuit, Macha adds a world music vibe to Hay Consuelo. Actually Hay Consuelo itself has glitched out vocals you can barely here and it's not until the next track Cosmic where you hear Macha singing " Hay Consuelo..." so it's worth noting, that if you play this disc on a radio show or in a mix, you'll want to play these two tracks together.

Hay Consuelo has a wandering bass melody, and the glitch vocals which make for a varied listen. Watch for the Macha vocal to come in at around the one minute mark into Cosmic (track 6 - unless the tracklisting is mistaken, of course and these track names should be reversed).

The tracks with vocals all come early on (within the first 1-5 or 6 tracks), so the album tends to drag after this. Not that anything is truly bad about tracks like Jess, Siberian, or Pipostrack.

The best of these later tracks is the last track on the album, Hydra. It enters with the sounds of waves lapping, and continues with a sweetly melodic doubled upped synth melody, while the waves lapping becomes a glitched out rhythm. Very nice ending to an almost perfect album.

Pier Bucci in the gullbuy: