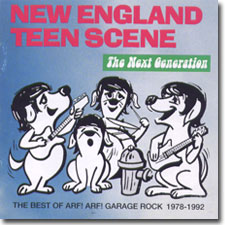 From The Remains and The Barbarians in the sixties, Willie Alexander in the seventies to The Lyres in the eighties, and The Brood in the nineties the New England rock scene has had a tradition based in garage music. Organ tremolo and straight on, pop rockin', bar weary guitar is a signature town sound. Garage songs have even been written about Boston (you're my home). Is it the "dirty water"? Is it the "frats" steeped in cheap keg beer and The Kingsmen's song Louie, Louie? Maybe it is the cold that brings that abandoned release of summer rock with the top down at the seashore? One can't say what forces work to create a legacy but it is easy to chronicle.

Arf! Arf! Records, of Middleborough, MA has released a compilation that archives the middle of New England's garage history with New England Teen Scene. Erik Lindgren, the owner of Arf! Arf!, has dedicated himself to garage music's history. Numerous compilations have been researched and released that have focused on preserving sixties psychedelic and garage music. Lindgren is a little more intimate with the material on this release because he has written and performed on many of these tracks. Not only does he know the sound, he makes the sound.

Lindgren is a composer, musician and performer in both the commercial world and the experimental realms. In 1980 he was a founder of the long-standing Boston experimental music ensemble Birdsongs of the Mesozoic. Earlier than the Mesozoic in the seventies he was part of the band Moving Parts. A Boston based punk art rock band that played a lot of sixties psych/garage covers but spawned into Mission of Burma when Clint Conley and Roger Miller left Moving Parts. Lindgren moved into the eighties with his spin off band the off-beat-art-band the Space Negroes.

This 26-song compilation is Lindgren's stab at preserving the history of Boston and New England's musicians that are dedicated to garage and psych sounds. From the packaging you may not get that this is a psych/garage comp, beyond those that know Arf! Arf! Records. The cover art is bad and the graphics are low-end. The interior liner notes are extensive and flesh-out the origins of each song and how they relate to the basic theme of New England psych's next generation. There are also reprints of album and label art by bands that are on Teen Scene. My favorite being the Go Go Guerilla's cover that parodies the Velvet Underground's Andy Warhol banana cover. In this case, it is just the peel since the Guerilla's already got to it. You will also find performance and friendly snapshots of the bands on Teen Scene. The packaging is non-slick and the photos and the liner notes create a loose, fun, friendly feel that may get lost and make buyers think that this is just awful stuff.

Out of the gate on first listen, there is no doubt that this is a garage comp and the dedication to this sound is serious, despite the graphics detachment from anything relating to the music. Rising Strom starts the CD with their cover of the lesser known garage track Love Starvation by The Sidewinders. The Rising Storm was a group of six Phillips Academy students from Andover, MA. Before they graduated and move on from Phillips they released an album with a pressing of 500 copies making them a highly sought after collectible piece of garage nostalgia. Arf! Arf has also released a CD comprised of the best of Rising Storm's releases.

The Storm's first contribution to this comp was recorded at Synchro Sound in Boston in 1992. This is a rousing song with pounding drum rolls and dead-on organ sound. The background vocals are yelled as much as sung and regenerates the sound of Louie, Louie or The Swinging Medallion's Double Shot of My Baby's Love. Derivative and competent the song rocks with a looseness and ease that feels live. Great guitar work that smacks of rock country Link Wray makes this a rousing good entry to the Teen Scene compilation. Later in the recording is their cover of Arthur Lee's Signed in D.C. It is slow and dreamy. Again the recording is loose and sounds live. Less rousing but just as serious the guitar is bluesy and ethereal. Harmonica emphasizes the blues feel and the honky-tonk piano amble into the track and emphasizes sadness.

The Go Go Guerilla's contribute three songs to the CD. Lindgren is on vocals and wrote the first track, Antidisestablishmentarianism. A silly bar rocker, it is fun and a novelty that grew from a session of musicians creating a song for a corporate training video. It is self admittedly a track rating high on the "stupid-o-meter". Their second addition also pushes the "stupid-o-meter". It does have a novelty sound of Halloween garage rock (which can also be heard on the track Surf Dracula's Hang Ten) and drunken bar sing-a-long anthem. Serious sounds and guitar soloing mix together with a loose feeling that is reminiscent of Palisades Park by Freddy "Boom Boom" Cannon. Go Go's third track is a bit more serious than the other two but has a camp feel. The Lion's primal beat and screams along with double lead vocals and low sax bursts provides a jungle feel like the sixties novelty poppy rocker, Stranded In The Jungle by The Cadets and later covered by New York Dolls.

Boston rock icon Willie Loco Alexander appears twice on the Teen Scene disc. Alexander has dodged success despite being inspirational to many artists beyond the New England area. Alexander has made his mark by retooling garage and pop music to make an odd concoction of his own design. His first song on the CD, Don't Cry Wolf, exploits Willie's organ driven garage pop sound with effeminate new-wave-ish vocals. With Lindgren on organ, Alexander on vocals this song is straight garage rocking and the sound is, again, loose and live feeling. The drumming is primitive and guttural and similar to the Australian band HooDoo Gurus. Wolf then heads on a tour of the world with the sound of belly dancing and clarinet snake charming sending the mind into a dervish spin then back to tribal drums and returning to the garage to go back out on a world tour. This is rollicking and sinister fun.

Willie Loco's second addition is the 1986 recording of Jeff Connolly's Don't Give It Up Now. Originally done by Connolly's band The Lyres it is a staple of the Boston rock scene. With Mission of Burma's Roger Miller on guitar and Erik Lindgren on Vox Continental organ the song delivers with style and a quickness that rivals The Lyre's original. This is a great moment, captured.

Jeff Connolly's Thee Liars, a.k.a. The Lyres, has his chance on the Teen Scene comp with two songs, Snake Eyes and a cover of The Sonic's The Witch. Snake Eye's is the first appearance of Connolly and it starts with the signature organ sound of garage rock via The Lyres. This is also atrue garage rocker. Great guitar licks and a fuzz bass mix in with the organ and take off. At first it is a little bit rocky but settles in to a zone. The feeling and sound is of a live and not overly rehearsed performance. The cover of The Witch is the same kind of performance; loose, live and true. The original Sonic's version is so good that it is hard to get past that signature sound.

The first girl from the garage on the Teen Scene comes from Portland, Maine's Chris Horne of the band The Brood. Horne fronts The Ladds From Bellvue. Erik Lindgren and Stanton Park Record's Aram Heller, along with Classic Ruins Carl Biancucci form a 1987 New England garage super group and ably cover The Psychopath's Till The Stroke of Dawn. Chris Horne's vocals are perfect for garage music. They mix well with the organ and the lo-fi, fuzzy tones. The Brood is a far under known garage band and the nod to Horne is applaudable.

The Twerps are a band that makes an interesting contribution to the CD. Through Crypt Records Tim Warren, who works with Lindgren's state-of-the art-studio - Sounds Interesting, Lindgren took the band The Werp's "Love's A Fire" mastertape from 1966 and retooled the song and Lindgren and his band re-did the music and put the old Werp's vocal track onto the newly performed musical bed. All this was done the old fashioned way- by hand. A neat bit of lo-fi technology resurrecting a new sound from the old.

The Four Commandments, another Lindgren band, have three songs and the first one, You Don't Know Me, is very similar to Sugar and Spice by The Cryan Shames. It is not a bad song but I see that Lindgren's production techniques are handily cutting and pasting sounds and even lyrical twists. The song begins to veer off the Sugar and Spice course but I would rather hear The Cryan Shames. The second song by The Four Commandments is lackluster but does have great background vocals and guitar soloing. It is a pastiche of garage music clips regurgitated as a new song. Their last track, Another Side of Reality, is a slick 24 track production and it helps. The studio production allows for some cool psych-effects and the guitar is great and the sound is right.

The liner notes slam together four tracks; Katz Kradle's Bad Case of You and covering Sam Cooke's Bring It On Home and The Huntsmen's Long and also Say What I Mean. The history of these bands and their connection is sketchy from the liner notes. Are these the originals that the liner notes speak of in the songs provenance? Is it an all girl band that has a guttural and masculine sounding lead singer? There are no musician credits. So I am to assume these are the same people in both bands? Nothing really spectacular is here but a worth securing for history from a couple of 45's from the 500 actually pressed.

Kenne Highland has two cover songs the oft covered Money and Boss Hoss by The Sonic's. Not really great moments but you do get Clint Conley of Mission of Burma on bass. You also get to hear a bunch of guys having fun together making music.

The New England Teen Scene is a CD that is tongue-in-cheek and serious. It is committed yet loose. After listening a few times I can see why the graphic are plain and the liner notes explain the songs existence. These are moments when a group of dedicated psych and garage fans, mainly Erik Lindgren and friends, pooled their talents as musicians and producers and let loose. Nothing too serious but you get fun moments as spontaneous as a live performance. This is a basement tape compilation. This is fun jamming with jubilance. They are not trying to break new ground. They are just using their talents to bask in the tradition of garage music and industriously montage the sounds and senses of a bygone era with humor and some honor and shedding light on how garage music sounded in a more recent past then The Remains and The Barbarians.