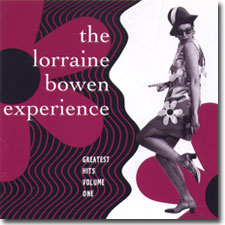 Here are the first two records of Lorraine Bowen - the "queen of the casio" - The Lorraine Bowen Experience Volume 1 and Volume 2. Her third record was Bossy Nova! As well, another label put out a 'best of' record Oh! What a Star!

The first time I heard Lorraine Bowen was on a Volume (an elaborately packaged series sent out to radio DJs in the 90s) compilation called Misfits. Her Crumble Song stood out above everything else on the disc (and there were lots of other great tracks). Crumble Song became her most famous song, but if you listen to her lyrics, many other great tracks can be found on these records.

Her second biggest song is probably Julie Christie. Both Crumble Song and Julie Christie can be found on Greatest Hits Volume 1, which came out in 1995. Greatest Hits Volume 2 came out in 1998. If I had to choose one record over the other it would probably be Volume 2, but both records are pretty fine and I would not want to have to choose one over the other (get both!). Volume 2 has a new version of Crumble Song, though I prefer the original version.

The titles of these records show her humor: when these records came out nobody had any idea who she was, and they were on a tiny label probably funded by her. Sadly, today no one has an idea who she is, and these records have become a hidden footnote of the Pop Nouveau era, when label such as Emperor Norton, Le Grand Magistry, Elefant, Marina and Siesta put out stunning records that combined pop with Combustible Edison styled lounge with a latin flair.

Lorraine Bowen has quite an image: she portrays herself as a younger hip version of Edith Bunker from All In The Family or Hyacinth (Patricia Routledge) in Keeping Up Appearances. In other words she is frumpy and comedically awkward. But her songs and lyrics are anything but - they capture feelings that we all have in common situations better than a thousand indie bands that have tried to do the same thing.

The music she plays can be casio-pop, jazz (see I Love London, which is like Blossom Dearie's I Love London In The Rain) or mature songs such as Botanical Gardens.

Lorraine's art is to capture the common things, see them in a special way, and to tell us a story based upon her view. The Ice Cream Lady is a completely buoyant song about a woman (Lisa) who runs the ice cream truck in her neighborhood. Pier Song is a beautiful contemplative song, talking about getting away from the city and sitting on the end of the pier (Brighton?). It is followed directly by Modern Way of Living, a celebration of city life. You can tell she doesn't assume a character for a song - she IS the person experiencing all the things we listen to her sing about.

She includes such odd 'regular people' interludes as The Chimney Sweep Speaks, which is nothing but the following (actual) testimonial by a chimney sweep:

My name is John Oakman from FRH Chimney Sweeping company , I've just swept Lorraine's chimney with a little bit of difficulty, but we managed to get it in the end and it was a pleasure doing it. It was nice meeting you.

Space has all the lush instrumentation and grandeur of a prime Gentle People track. It is a fantastic track. I Love The Country is another song that purely delights. Everyone who lives in the city requires the balance that a trip to the country can bring. The song even has whistling!

Richard is currently my favorite track, because it is the best song ever about losing track of a friend, something that happens to everyone with friends. She talks about having to Tip-Ex his number from her book. what is Tip-Ex? Is is a white-out like Liquid Paper? I may not understand THAT reference, but every feeling she expresses is completely familiar to me and may to be you as well.

Where to start? You HAVE to hear Bicycle Adventure (on the first record) and its companion Bicycle Adventure (on the second record). Both songs evoke such positive feelings that you will seek out the discs right after hearing them. I can't wait to hear the album she is currently working on, Lorraine Bowen's Vital Organs. She describes: " It's got quite a few gems on it and is more consistent even though it goes from kitsch quirk to industrial indie to string sections in 35 minutes with a karaoke version of Crumble as a bonus track!"

Fantastic music - thanks for creating it Lorraine!

Lorraine Bowen in the gullbuy: