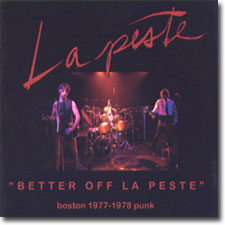 Boston has always been a city in the shadow of New York City. Many people move to Boston because NYC eats them up and spits them out. Boston on the other hand, is smaller and has many places for a band to play. It is a more supportive city, where you can rise to the top if you are good at something. There have always been lots of Boston bands that were pretty fine.

Along with Unnatural Axe and The Neighborhoods, La Peste brought the sound of The Jam (minus the Mod tendencies) to Boston in the late 70s, wrapped up with a DIY ethic and a consciousness of the neighboring NYC punk scene.

Better off La Peste is a monumental release - a 26 song CD by a band that only released one 2 song single. There are many CDs by obscure bands that have only put out one single, and most consist of live shows that would only be of interest to someone who was already a fan, or (better yet) saw the band, possibly at one of the shows chronicled. Better off La Peste is not that type of disc: this CD will appeal to anyone. There is great stuff here - both sides of the monumental Better Off Dead b-w Black single plus 12 studio tracks which have recently come to light for the first time ever, provided (with the band's blessing) by the person who made them: Jordan Krantz.

In 1996 Matador put out a self-titled La Peste CD/LP, but it only had 5 studio tracks, and it didn't even have the studio version of Black. Anyway, that CD is long out-of-print. This disc blows that one away. The studio tracks are culled from three CDRs that the gullbuy had the fortune to review in 2002. At the time, getting them was like meeting with Deep Throat in the Watergate scandal. I had to go to a park on a rainy night and meet someone I had never met before. But I remember the excitement I experienced when I heard the sessions, and the very best of them are all here on this disc.

Buy this CD - it is highly recommended!