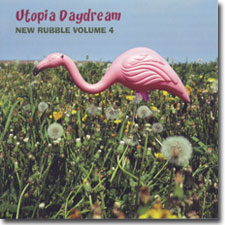 Utopia Daydream, Volume 4 in the New Rubble series, spotlights obscure 60s pop music recorded between 1967 and 1969, and is a collector's delight for those interested in the pure pop done 60s style. There aren't really any hints of the usual "psych," that compilations seem to need nowadays as a selling point, though there are elements of fuzz guitar and lyrical content that sometimes go beyond the basic pop song structure.

As the other compilations in this series have shown, for each of their respective genre spotlights, the New Rubble series have been impeccably chosen collections, even if the fact that the genre hopping from disc to disc can be confusing and the artwork and liner notes vary from compilation to compilation drastically in how informative they are. For those of us in search of obscure pop gems from the 60s for one reason or another, Utopia Daydream is a sweet way to pick this stuff up in pretty clean sounding sound without dishing out for the original vinyl.

The Endevers' She's My Girl from 1969 starts things out with a fresh, Monkees sounding tune, that has a sweet beat, some nice fuzz guitar lines, and a catchy "She's my girl" chorus. Advertising Girl by Davey Sands & The Essex has that Monkees/Mike Nesmith countrfied electric guitar riff that was so cool sounding in 1967. And nother track with some fine fuzz guitar straight out of Daytripper is The Rebels' Call Me released on Page One in 1967.

The Dodos' I Made Up My Mind from 1967 sounds like the lighter side of The Who. Jon's Polly Sunday another one from 1967 sounds just like you would imagine a song called Polly Sunday would sound like, a laidback whirling romp with tasty organ and a plucky guitar sound with hints of melancholy.

The Definitive Rock Chorale was actually a 60s pop supergroup produced by Ellie Greenwich and Mike Rashkow featuring Johnny Cymbal, Ron Dante, Toni Wine, Tommy West, and Terry Cashman. Picture Postcard World was written by Paul Levinson and released as the b-side to their single Variations On A Theme Called Hanky Panky recorded in 1968. Paul was actually in another group that Ellie Greenwich and Mike Rashkow had discovered and produced called The Other Voices (aka The New Outlook). Interestingly, Paul is now a professor at Fordham University in NYC and a sci-fi writer whose latest, The Plot to Save Socrates, is gullbuy owner Carl's favorite book at the moment..

Picture Postcard World is an early attempt by Paul at questioning the modern day norm of such things as air conditioning and the plastic world we live in and how it effects our reality. It combines this questioning of modern day life with a harmony vocal style perfectly and is a real treat of late 60s pop.

Mark Wirtz was a genius when it came to 60s pop confections and The Guards' Let Me Go Home was just such a Mark Wirtz production released by German Vogue in 1969. It was actually recently compiled by Mark Frumento in the second installment of Mark Wirtz rarities called Pop Works Two: Rarities by The Matchmakers, Miki and more 1968-1970 but was only available on a CD-R a few years ago.

The Corsairs covered the Hollies' Pay You Back With Interest in 1967 for their only single release and a fine cover of this tune from the Hollies' For Certain Because... album.

The Fresh Windows' Summer Sun Shines from 1967 has a decidedly Syd Barrett era Pink Floyd quality to it which is even more confusing because it was the b-side to a track called Fashion Conscious which had a songwriting credit of Barrett (but it wasn't Syd Barrett).

The Quiet Five featured Richard Barnes and Kris Ife who worked with Mark Wirtz and also recorded as Judd. The Quiet Five also just had a cd compilation released called When The Morning Sun Dries The Dew on RPM in 2005. Their track Goodnight Sleep Tight is a chirpy little pop number.

Toby Twirl's Utopia Daydream from 1968, the track from which this compilation takes its name is a paisley pop delight. Toby Twirl were from Newcastle and previously recorded as the Shades Of Blue, but released Utopia Daydream as the b-side to the track Movin' In.