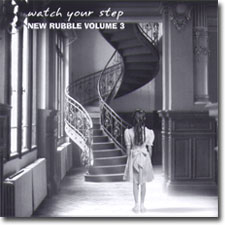 Watch Your Step, Volume 3 of the New Rubble compilation series released by Past & Present in conjunction with Radioactive, mines a completely different territory than Volume 2, this time spotlighting British Beat singles released between 1964 to 1966.

Watch Your Step will appeal to those who are curious to dig further than the Rolling Stones, Animals, and Mersey beat type sounds emanating from Britain, but that has remained unreleased in this CD age.

Watch Your Step combines the retro beat sound with the more sophisticated pop sound of the British Beat sound. So it does take some digging to find what makes this compilation so worthwhile.

Some retro beat songs include Tommy Bruce & The Bruisers' Boom Boom (Tommy Bruce first starting rocking in the 50s), Freddie Ryder's Slow Down (Freddie was also known as Freddie Self and was a member of The Fourmost), the Laurie Jay Combo's Teenage Idol (Laurie Jay started drumming in the 50s and has a Chuck Berry sound here), Dave Davani & The D-Men's rave up on Midnight Special (this group later became the Dave Davani Four), Danny King's version of Tossin' and Turnin' (Danny was the singer from the Mayfair Set, and this song was also covered by the Dave Davani Four) and The Huskies unreleased acetate of Matchbox.

These tracks are all fun and retro but nothing here is so superb that you will lose sleep if you miss them. The more sophisticated Brit beat pop sound can be heard on:

These more sophisticated Brit beat pop tracks are definitely the bigger reason to hunt this compilation down, though there's nothing wrong with the 2nd tier retro Brit beat tracks except that they aren't as well done as the cream of the crop would do that sound.