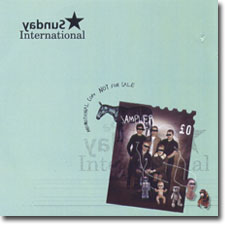 Sunday International seems to be a kind of accidental band. Starting in 1997 out of a photo studio just outside of Manchester, England. Two friends Phil Wainwright and Jeff Lloyd used the space to jam. Their desire to create far out weighs their pupal musical experience. After much prodding and coercing a friend, Ian Parkin, to sing with the band. After extensive convincing Parkin joins the band and figures that if they hear how badly he sings he can move on the "regular activities in the day". But that plan backfires and he is invited to stay.

Wainwright started out playing drums and then decides to pick up and start playing the guitar. Lloyd, who has considerable more musical development, also plays guitar and a few songs are "written" and the Sunday International repertoire begins.  Melanie Levick Parkin joins in the group and adds vocal, germanic vocals. James Corazzo joins in with the band on guitar with the intention of the association being short lived. He is still a member of the group.

Lloyd is tired of wasting his 15 years of musical experience playing "this sh*t" and leaves the band. Despite his departure the band is getting an idea of what they are actually doing and continue on. Part of that continuance is the addition of Richard Mulhearn on the bass. The band purchases a 4-track and begin to record and produce their material. All this despite none of the band members having a clue as to what they are doing or how to really play their instruments. Again, despite this band's sound and commitment is coming together. The members decide to release their own material on CD.  Their first release is a 10-CD set, cheekily entitled, Landfill. The band believes that this will sell thousands of copies and be the big beginning. Well....

The band mails a CD of material to Jay Taylor who promotes Night and Day. Taylor gives the CD some accolades in City Life despite not really knowing how to classify the band and their music. Taylor puts them on the Night and Day bill and the band's debut is a rousing success and garners attention as being one of the best debut performances of 2002. Some may have classified the performance as "shite". The more memorable factor of the bands performance is the incessant switching and swapping of instruments by the band members. They also pocket a few pounds from the audience by selling rubber masks of celebrities that the audience is encouraged to wear during the preformances. Early on Sunday International reaches out beyond the music and enters into the world of marketing and promotion and the mask aspect continues at their shows and new ideas metamorphose into new promotional concepts.

Gareth Kenyon joins up with the band after bassist Mulhearn moves on. Kenyon's signature style is soaring guitar sonics and adds a fresh element the blows through the band and material. The band keeps performing and creating buzz. The band begins to get serious and practice. Sunday International is actually breaking out and maturing into a tightly crafted chaos and beauty. the band begins to make inroads into the Manchester musical  circle.  They get an little write-up in the magazine Flux and Hey, Hey You, on this CD, is released on the flexi-disc that comes with the Flux magazine. The owner of Twisted Nerve records, producer Andy Votel, asks the band to add the song to the pending T.N. compilation, This is the Winter of our Discount Tents. Through more gigs and connections and they are asked by Mike McCluster if they want to put out a single.

Here is that single. I had heard the Hey, Hey You song on the Twisted Nerve comp and it was very intriguing and beguiling. The song fit well with the compilations smart eclecticism and unique talents. They were like many other bands on the T.N. comp, hard to pin down. Not destined for NME and Rolling Stone. But each band had an intrinsic and moving quality based in unique approaches and non traditional arrangements and interesting compositions. The band has had its sound compared to My Bloody Valentine, Tortoise, Spacemen 3, Bow Wow Wow and Gallon Drunk. These comparisons only add to the varied sounds sometimes emanating from the same single track.

The first song on the 2-song CD is So Calm. It is unique to this single and is a first time release. The track starts with feedback guitar and rock steady beat. The guitar chords suggest Beatnik Filmstars and Guided By Voices while hinting at Arcade Fire. More planned and thought out then the first time I had heard them, this song is a bit of a shock. I was expecting less rock and more sonic, aural oddity. The lo-fi male vocals mix well with the buzzing poppy guitar and interesting end comes with more feedback and production tricks although defying their varied origins.

The second track, Hey, Hey You (which I want to believe is a play on Pink Floyd but can't confirm) is a more sparse sound. Where So Calm had dense and grainy layering Hey, Hey You has more room between the instruments. So Calm seems to be a direct plea for radio play and acceptance. Hey, Hey You is more personal and despite its enjoyable quality is not made for Indie media acclaim.

Hey, Hey starts with an ultra-lo-fi sound like a toy bass and guitar. The production misses a beat and goes into clear production quality. With it's sparse and plucky plodding pace it is an easy ambling tune, complete with whistling. The female vocals are delivered with a touch of There is a kind of quirky, white funk to the track. As "You" gets toward its end the song becomes almost a whisper and reprises with more veracity. This song seems more artistic and craftier an approach and listen.

Also available from Sunday International, for those who have yet to discard their turntables, is a gorgeous piece of delicious white vinyl released by Future Butterfly, as well. With the two songs that appear on this CD single and an additional track. The Salad Bar and Other Toys. But, alas, I no longer have a turntable and was not able to report on the third track released by Sunday International.

After listening to this CD single I wonder, what was on that 10-CD set, Landfill?  Where is the purported instrument shifts and varied array of influences? This is a competent release but I think this band is still struggling to find its own heart and true soul. Are they just good at marketing and promo? Are they just trying things out till something hits with the audience, peers and pocketbook? The discoveries on a journey are the real payoffs on the trek to find a claim to stake.

But the thing I do love about this band is that they are going at their craft with a naive approach. They will learn as they go along. Like many bands in the history of rock music Sunday International is not mired in expectation but desire. The chance of coming up with something unique and interesting is increased when the artists learn by doing. Instead of banding together to be the next big thing this band has gone from imago to pupa and then perhaps the future butterfly. like the label name suggests. They are banking on the future beauty. I think there is a good chance that we will experience that in their future. There is always that chance that it won't be a butterfly but a beetle or a moth.

7" White Vinyl Single Tracks:
A-side: So Calm
B-side: Hey, Hey You and The Salad Bar and Other Toys

Sunday International in the gullbuy:

Now is the Winter of our Discount Tents