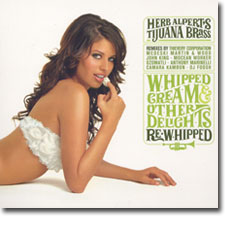 Whipped Cream & Other Delights Re-Whipped is a real find - a remix record that is unlike all other remix records. Instead of finding a collection of artists interpreting Herb Alpert classics, a complete record (Whipped Cream & Other Delights) is brought up to date in such a consistent manner that you cannot even tell that there are different artists providing the interpretations.

I have passed this CD along to several other people who have found the disc as enjoyable as I did. Even though anyone who listened to this music as a child may have fondly recalled Herb Alpert's music, the songs themselves were completely ingrained, and listening to the record again may have seemed unneccessary. Now there is a completely fresh disc that has the songs we all love put through a modern lens.

All of the tracks are instrumental (at least basically) excpet Love Potion #9. The vocals by Ozomatli may turn off a few people, but nothing else on the disc will upset anyone. This is not a hop-hop tribute to Herb Alpert, or a molding of his work into a new genre: it is just a modern re-telling of a timeless classic - highly recomended!