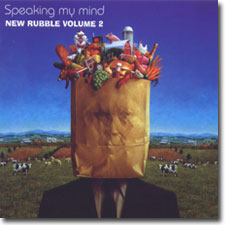 The Rubble compilation series from Past & Present has moved over to the Radioactive label, and been re-dubbed New Rubble. Volume 2 in the series spotlights obscure UK prog-psych from 1968 to 72, but really this is hard rock with some psych and prog elements thrown in.

There is a fresh quality to these obscure releases, but you really need to like hard rock to enjoy them. Most of the songs have a rocking guitar rock sound with wailing vocals, with added elements like wah-wah fuzz guitar, horns and organ. For those interested in this time period in hard rock, this is a good way to hear what would amount to a set of pricey 45s.

Taiconderoga's Speaking My Mind is the track that gives this volume its name and it rises above the other hard rock early on this compilation with its hard hitting rhythm, bongos and killer fuzzed out guitar solo. The vocals also have a cooler sound to them than a lot of the over the top vocals on display, and when they do go nuts here they are buried appropriately during the fuzzed out workout at the end.

Eire Apparent worked with Jimi Hendrix on their song Yes I Need Someone, when they toured with Hendrix, and had him produce and play on this track. There are definitely elements from the later period of Jimi Hendrix like a lot of sweet high pitched electric guitars that come and go in the mix. The song has a weird "la, la, la" type of vocal chorus, and the lead vocal in general leaves a lot to be desired, but those electric guitars work wonders in this intense track.

Glass Menagerie's Frederick Jordan is so popular it actually got reissued as a 7 inch, but here we are treated to the more obscure stoner throb of Do You Ever Think, which has a cool distorted guitar sound.

Nancy's Hesitatin' combines a Van Morrison Moondance type riff with a harder rocking vocal (with some laughing) for an interesting combination that sounds like it wouldn't be out of place on an RPM compilation.

The Fruit Machine's I'm Alone Today combines a piano melody with a pretty cool Ozzy type vocal to give this hard rock track an interesting sound. The vocalist from The Fruit Machine went onto to work in Rare Bird, whose Hammerhead is a killer track with the Ozzy type vocal, a solid beat and more of that piano sound with added organ.