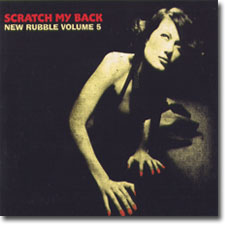 Volume 5 in the New Rubble series, Scratch My Back covers UK girl singers from the 60s with an edge. So included here are fuzzed out girl in the garage type classics, blaring lead UK girl singers and frenetic beats that accompany edgier songs than the typical girl group sound. This is the type of sound that would later influence the Billy Childish project Thee Headcoatees (and their earlier incarnations), Holly Golightly, and much of the UK girl rock sound.

Songs that surely influenced Thee Headcoatees include Jan Panter's fuzzed out masterpiece Scratch My Back (which has been compiled before on 1993's You Can Be Wrong About Boys - Jan Panter wrote this one herself and would later work with Mark Wirtz), Tammy St.John, whose scream before the guitar solo in her raw cover of Boys is the equal to Kyra Headcoatee's screams (a Shirelles' song later covered by Billy Childish's group Thee Milkshakes with female lead vocals), and Mary McCarthy's Hollies' cover of You Know He Did (which has a Kinks' like guitar riff).

A song originally done by the male group The Downliners Sect (a group who later hooked up with Billy Childish when they regrouped and recorded an album with him), Find Out What's Happening as covered by Tiffany And The Thoughts has a loose Beatlesque feel with a Jimmy Page styled guitar sound.

Another song originally done by a male group covered here is the intense Tracy Rogers' cover of The Sorrows' Baby which has incredible backing and a thumping bassline by The Fleur de Lys and surely was a huge influence on the sound of Holly Golightly.

Glenda Collins was Joe Meek's girl and can be heard here with Ritchie Blackmore from Deep Purple covering the John D. Loudermilk song Thou Shalt Not Steal made famous by Dick & Dee Dee.

Samantha Jones' soulfully upbeat go go inspired Go Ahead was actually used for a Ford ad - and has been compiled on the Backcomb N' Beat - Dream Babes Volume Three compilation. For another breezy and delightful Ford ad, be sure to check out Samantha Jones' Advert for Ford Cars found on the Magpie compilation.

Judy Carnes actually sang Sock It To Me on Laugh In in 1969 with the words Sock It To Me written across her stomach while dressed in a bikini - so now this go go goof makes more sense.

Track listing with liner notes from the CD booklet