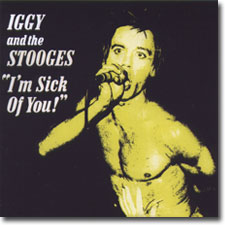 I'm Sick Of You was originally a 7inch which came out in 1977 on Bomp. The recordings were demos for the 1972 record Raw Power.

Those same sessions spawned a second 7inch (I Got A Right b-w Gimme Some Skin) which Bomp has also reissued as a CD.

After the 3 songs which appeared on the single, I'm Sick Of You includes 5 live tracks which are pretty interesting too. Many people who buy this CD will never check out these tracks, as they remember the 7inch and just want to get those crucial three songs on CD. But the live tracks should be heard.

The first live track is a 1878 version of Shake Appeal, the song Tight Pants ended up becoming. There is some cursing in the intro, so you can't play this one on the radio without previewing it and cueing it after the intro.

The second track is Winners and Losers, from a 1986 show. Iggy sounds like Glenn Danzig, crooning to a slowed down song. The sone incorporates parts of Scene of the Crime in the middle of it.

Each of the live tracks was well-chosen - none are what other reviews have suggested as 'mere fillers'.

Iggy & the Stooges in the gullbuy: