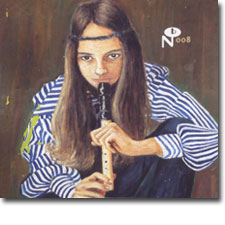 The label Numero group's last two releases tackled Afro-beat from Belize and a disco-roots compilation so it's only natural that their next release should focus entirely on obscure female folk artists from the 70's, right?

Whatever the reasoning behind their compilation themes, the label has an uncanny knack for unearthing some positively obscure material. Only one artist featured on this album recorded for a commercial label, Vanguard. The rest were all, as the liner notes state, "financed by summer jobs, family members, and religious organizations."

So, what do albums financed by summer jobs and religious organizations sound like? Well, surprisingly good actually. From production values to the quality of the artist's voice and originality there is truly some fine material on display here. That's a good reason why these albums put out on private labels in batches of 500 or less hold such an allure because there really is some 'lost' stuff out there that is worth checking out.

There's a couple of tracks that certainly possess an amateur quality to them too but even these don't really detract from the collection. Shira Small's contribution Eternal Life, came from an album that was recorded as her senior project at a Quaker boarding school. The track has that kind of Langley Schools Music Project charm to it with odd phrasing and lyrics like, "Eternal life is the intersection of the line of time and the plane of now. We live forever."

The liner notes talk at length about the influence and importance of Joni Mitchell on this kind of female introspective songwriting found on Ladies of the Canyon which also happens to be the title of Joni's 1970 album for Reprise records. Joni Mitchell and the rise of the singer-songwriter in general was a significant development for popular music of the day.

Young women had singers like Joan Baez and Judy Collins to look up to and emulate but their styles were much more rooted in older folk or classical standards. Joni Mitchell on the other hand was important because she offered up a new and distinctive approach towards writing songs that was sophisticated, modern and highly personal.

As evidenced on this compilation, that approach spawned leagues of imitators and you can hear this influence directly on many of the tracks. The Caroline Peyton track in particular sounds, not in sounds like, but literally sounds like it could have come off Mitchell's Clouds album from 1969.

Other highlights include the gorgeous cut And I A Fairytale Lady featuring the virginally pure vocals of Carla Sciaky and a track called Wildman recorded by a husband and wife duo who toured heavily throughout the early 1970's on what was called the 'steakhouse circuit."

Of the fourteen cuts almost all are winners and as usual Numero Group has gone out of their way to include detailed biographical info and the original album covers for all the artists. Recommended.