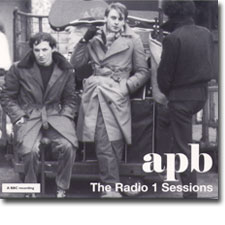 APB's The Radio 1 Sessions collects five Radio 1 sessions from 1981 - 1984 for the first time. It is not a reissue of a record that came out in the past.

APB bridged the sound between such rebels as A Certain Ratio or 23 Skidoo and the more groomed sound of Haircut 100. Each band shared the slap bass and funk guitar sound. But APB was a trio - you did not have the embellishment of brass, percussion, or backing vocals. Added to this was the distinctive sound of bassist Iain Slater's voice, and you had a sound you could love - but could just as easily tire of. After hearing the hits Shoot You Down and Palace Filled With Love many times on the radio, that is just what happened to many of their fans, and APB never fulfilled the promise they showed so early in their career. It is worth noting that the band did not include either of their hits in any of the sessions.

The first four songs are from a December 23, 1981 John Peel Session. My Love starts off the CD strongly.

The second four songs are from a May 23, 1982 David Jensen session. This was my favorite session. Danceability and Crazy Grey are especially fine.

The final four songs are from a March 29, 1984 David Jensen session. The band was changing at this point, becoming more of a pop band and less of a punk/funk band, as that sound was unfashionable once again in 1984.

The Radio 1 Sessions is a great record to hear. APB had their own sound, and this record shows their sound without anyone or anything there to re-interpret it.

Something to Believe In