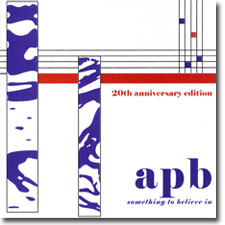 APB were a punk/funk band from Aberdeen Scotland. They released many great singles that received spotty distribution, resulting in the band's cult status. Areas that knew the band loved them, while people in other areas never heard them at all.

Having grown up in Long Island NY, I was in one of the areas that loved APB, heard APB on the radio, and saw APB in clubs. The band had an instantly identifiable sound, characterized by the slap bass of vocalist Iain Slater.

Something to Believe In was an LP by APB which collected their singles. It originally came out in the US on Link Records. This 20th Anniversary reissue includes a bonus disc.

The bonus disc has live tracks, an unreleased studio track, a single B-side, and some demos the band recorded. The first five songs were recorded in 1984 at Hofstra University in Queens. Tracks 6 and 6 were recorded live at Malibu Night Club, the giant beachside club near Jones Beach, at Lido Beach in Long Island. The eight track (Killing is Fun) is an unreleased studio track from 1981. Crazy Grey was an early B-side. Tracks 10-14 are unreleased demos recorded by the band between 1985 and 1989.

The liner notes inform us that Iain Slater is still involved with music. There is a brand new APB full length in the works, and Iain Slater can also be found mixing sound for Keane wherever they play. It is great to have this CD in the stores. It is filled with fine music, and is a solid buy for anyone who likes post-punk bands.