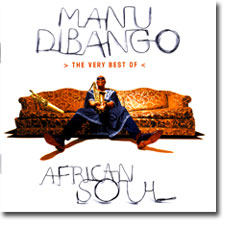 The disc mixes up tracks from the various periods of his career, though the liner notes spell out the timeline of his career very nicely. In fact, after reading the brief but informative liner notes you WILL appreciate this disc more than you had before.

Between 1967 and 1971 Manu moved to Paris and joined Nino Ferrer, described in the liner notes as an "r n' b dandy." The CD starts off with a 1997 remix of the 1967 track Dikalo. which in the Doukala tongue translates to 'newsmonger.' The track was a pre-cursor to his biggest ever track, Soul Makossa (recorded in the next period of his career).

'The Ivory Coast years' took place between 1976 and 1978. Manu moved back to Africa a superstar, and toured and recorded extensively throughout the continent. Released in 1977, Big Blow was the theme song for the French TV show Une pêche d'enfer. As the liner notes inform us, "the title refers to an African superstition: when a women sneezes in the morning she generally will have a bad day."

Between 1979 and 1984, Manu enjoyed 'The Jamaican Experience.' He stayed in Jamaica for a month and, with Chris Blackwell producing, recorded the rhythm part for a double album using the famous rhythm section Sly and Robbie (Sly Dunbar: drums, Robbie Shakespeare: bass). Manu was the second European to use the team, following Serge Gainsbourg, who used them on his Aux Armes et Caetera album earlier in 1979.

1985 to 1997 are referred to as his 'Hats Off Years.' During this period Manu recorded with many notables, keeping on top of music trends such as acid-jazz and hip-hop.

There are many fine tracks on this comp. It is a solid buy!