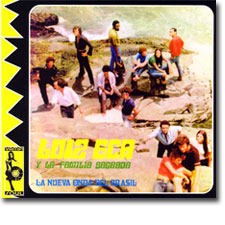 Brazilian pianist Luiz Eça is joined in this super-group of Brazil, in what was the latest new sound to hit that country in the late 60s/early 70s, the Onda Nueva (translated as the New Wave, not to be confused with the 80s New Wave movement). Onda Nueva was a short-lived but exciting sub-genre of the bossa nova sound which picked up the pace of the bossa nova beat and combined it with some loungey sunshine pop vocals and subversive soundtrack music type arrangements. The Onda Nueva sound was just part of the ever shifting sounds emanating from Brazil in the late 60s/early 70s.

Luiz Eca was best known for his hard hitting piano-led bossa jazz in the modernistic combos Tamba Trio and Tamba 4 with CTI productions on A&M Records and his arrangements for other groups like Quarteto Em Cy. For this record recorded in Brazil in 1970 but released in Mexico in 1978 on the Discos RVV SA label, Luiz Eca gathered together Nelson Angelo, Joyce, Nana Vasconcelos, Claudio Roditi and even Wilson Simonal to help him create his own version of the Onda Nueva. This Brazilian supergroup together combines awesome percussion and rhythm, horns, vocal harmonies and a unique musical tension. It reminds me of a cross between the Quarteto Em Cy's album from 1972 (which Luiz Eca arranged) crossed with the Aldemaro Romero & His Onda Nueva recordings from South America.

What took so long for this album to see the light of day, and why it was released originally only on this obscure Mexican label and sold in hotel lobbies (so say the liner notes), is somewhat of a mystery. This cd reissue from Vampisoul is the first in a series of reissues of albums or compilations released on this Mexican label, though this album has also actually been reissued on the Lazarus and Inca Rock labels.

These are all popular Brazilian tunes given the Luiz Eca arrangement twist, and often are quite startling, innovative and fresh arrangements of songs you may have grown used to in more traditional arrangements.

Along with these, there's the extended medley of O Homen Da Sucursal and Barravento which opens the album, the groovy Sequestro, and the cd closing Please Garcon, the only song sung in English by Joyce that has a more acid folk sound to it.

I've noticed some sound quality issues with some previous Vampisoul discs, and this one too doesn't sound all that great. Whether that has to do with this album's strange history or Vampisoul's reissue can only be answered if you are able to compare this version with the versions released on the Lazarus and Inca Rock labels. Or it could have been how the album was recorded, since it does sound like it was mostly, if not all recorded live in a studio - and perhaps it was a recorded version of a live show which could help explain it, since Brazilians often recorded albums of nightclub shows they performed. There is sometimes a shrillness in the vocals, and a tininess in the percussion which makes me wonder if it was the recording environment which led to the less than stellar recording quality.

As it stands, this is a fine document of a startling and unique album, but, it's not really one you will throw on, crank up and bask in the glory of its sound quality. It's more the type of innovative album that documents a creative and fresh time in Brazilian music history.