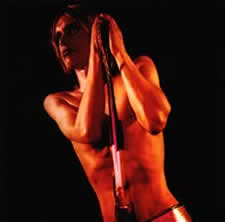 Originally released in 1973, I always felt that, despite the powerful songs, that David Bowie's final mix of this album was, well, wimpy.

Not enough bottom, vocals too far forward in the mix and the band impotently raging way waaay in the background. No balls. Well, not quite; they WERE there and you could TELL they were there, but there was no tangible evidence.

Twenty-odd year pass and Columbia Records sends word to Iggy Pop: they want to release a remixed version of the album and if he doesn't do the job, they'll find someone else who will. Knowing an offer he can't refuse when he hears one, Iggy signs on. His remix, released in 1997, is everything that I wanted: a warmer, bigger mix with *everything* in-the-red loud.

Pip prefers the original mix, but then, we all know what a big wuss he is. This is Raw Power for the big boys. And fer chrissakes, play Search and Destroy; no one remembers it was in a Nike commercial.

Other recommended tracks: Your Pretty Face Is Going to Hell, Raw Power, Shake Appeal, Penetration, I Need Somebody, Death Trip and Gimme Danger. Oh wait, that's ALL the songs on the album. Well, play 'em all, then!

Note from Carl:
I like the original one better too. Bowie's production was wild. It was all treble and caused killer results when cranked through cheap stereo speakers. James Williamson's guitar solos approached the zenith that Ace Frehley only dreamed of. My older sister used to complain when I would play 'Raw Power'. I grew up with that LP, its Munsters style lettering and trash style. The new mix was as much of an affront to me as the 1984 remix of The Heartbreakers LAMF record or the new version of 'Get Carter', though I understand that on a modern stereo the new mix rips and rocks.